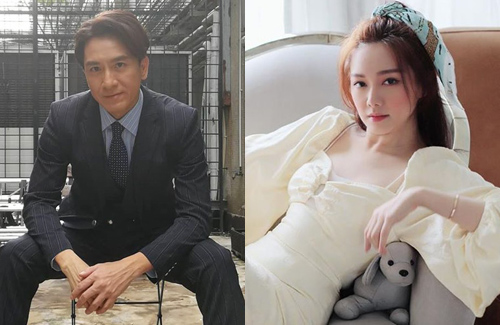 After publicly acknowledging their relationship in June, Kenneth Ma (馬國明) and Roxanne Tong (湯洛雯) continue to show signs that they are ready to settle down together soon. As both are very family-oriented, getting approval and blessings from their parents matter a lot. Fortunately, Roxanne’s parents love Kenneth and find him to be very trustworthy. Viewing each another as potential marriage partners, it may be a matter of time before wedding announcements are made.

The couple’s recent outings reveal that they are interested in finding the perfect home first. Earlier, Kenneth and Roxanne were spotted on a date in Repulse Bay, where they frequently stopped at real estate stores and chatted with agents. It is speculated that the couple was shopping for a new home in preparation for marriage. Other reports claimed that the two were testing out the waters, and wanted to live together first.

When contacted for a response, Kenneth shrugged off the reports and said, “We were walking by anyway, so just stopped to take a look. There’s no special meaning behind it.” Whether they are seriously house hunting or just casually interested, Kenneth and Roxanne love to spend cozy time at each other’s homes.

As their relationship is going so well and Roxanne is known to love relaxing indoors, she may have gained some “happy weight” earlier. While his girlfriend is known for her love of food and fluctuating weight, Kenneth responded, “She does try to keep fit. These photos were taken a few months ago. She has lost a lot of weight since. Perhaps you guys have not photographed her more recently. She has lost a lot of weight because she has a lot of upcoming projects. She is just someone who can easily gain and lose weight.”