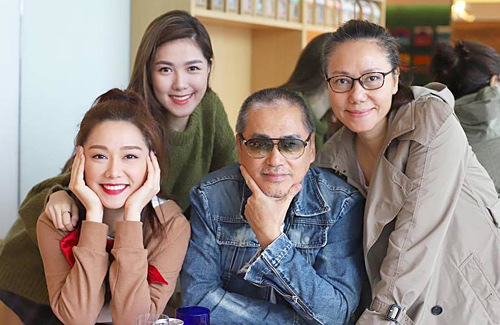 While Kenneth Ma (馬國明) and Roxanne Tong (湯洛雯) have been dating for two months, the artistes have already met each other’s parents. With Kenneth’s good personality, he easily won Roxanne’s parents over and received their blessings.

Reporters reached out to Roxanne’s father and actor, Tong Chun Chung (湯鎮宗), for his opinion of the budding relationship and he shared, “Thanks to everyone for their blessings.  I gave them my blessings too. My impression of Kenneth is very good. He is polite to everyone and he is very down-to-earth. His only negative is he is too humble. He doesn’t need to be so humble when he is so talented. That was just a joke!”

Roxanne’s mother also gave Kenneth a perfect score and praised him for being a good man. She revealed that she had a meal with Kenneth once and teased him for looking very nervous when meeting the parents. Roxanne’s mother added, “I hope next time I can try his cooking, because my daughter does not know how to cook.”

When reporters mentioned that Kenneth is at the age where he would be thinking about marriage, Roxanne’s mother replied, “I know his age. I think he would be looking to get married and settled down with someone. I hope their relationship will blossom. I know they talked on the phone for a while and have built a good foundation. They met the parents after confirming their relationship. I only recently learned that they were dating. I also feel at ease giving my daughter to him. I believe in my daughter’s choice.”

Kenneth and Roxanne’s relationship received many blessings because the couple had eased into dating after realizing they have many shared values. Speaking about his new romance and what attracted him to Roxanne the most, Kenneth said, “Her personality is very simple and she laughs easily. She chases after very simple things and it’s similar to me! We have been chatting a lot recently, and we seemed to have developed some feelings.  So we decided to try it out.”

Asked if he hopes to get married, he said, “I didn’t think so far! The post is a public announcement.  We have a consensus that if we are photographed, we would admit [the relationship]. To randomly admit [to the public] is strange and feels I’m creating publicity for myself. I didn’t want to make it seem like I’m creating publicity. Since we were filmed, we made a post!  I hope everyone can give us space, so we can progress!”