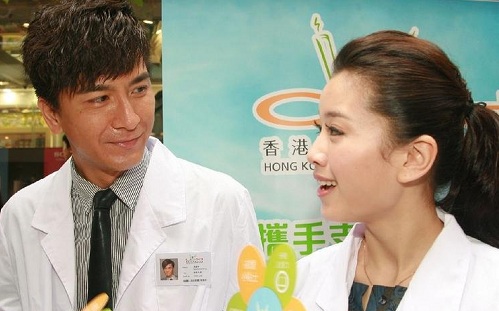 With the fierce competition between local Hong Kong television stations about to escalate, TVB was not taking any risks. This year’s heavyweight dramas include Triumph in the Skies 2 <衝上雲霄2> and The Hippocratic Crush 2; both sequels hoped to continue the success of their predecessors.

Currently heavily promoted, Kenneth Ma has just completed filming Silver Spoon, Sterling Shackles <名媛望族 >, another highly regarded drama. In June and July, Kenneth will film Season of Love <戀愛季節>, followed by Triumph in the Skies 2 afterward. At the end of the year, Kenneth will shoot The Hippocratic Crush 2. Kenneth announced, “Francis Ng and Chilam Cheung have confirmed that they will film Triumph in the Skies 2. Lawrence Ng will appear as a doctor in The Hippocratic Crush 2.”

Since Kenneth Ma and Candy Chang both do not smoke, they were a perfect fit to promote yesterday’s “World No Tobacco Day,” urging people to stop smoking for health reasons. Kenneth was surrounded by the crowd, asking for autographs at the event in the Causeway Bay district.

Candy Chang also wished to date a non-smoker as well. Asked what she would do if she had to film a kissing scene with an actor who was a smoker, Candy replied, “I will ask my costar to eat a piece of candy. I have not filmed a true onscreen kissing scene yet!”

Jayne: TVB is bringing back its veterans. TVB is preparing for war with CTI! Who has the power to persuade esteemed veterans to film for them?

TVB is looking a lot like Hollywood these days, churning out sequel after sequel, eager to replicate former successes. In addition, large ensemble casts are very common, trying to attract audiences with a star-studded cast.

Lawrence Ng is a very welcome presence in “The Hippocratic Crush 2,” although it is not clear whether his doctor character will be Paul Ching from “Healing Hands.”