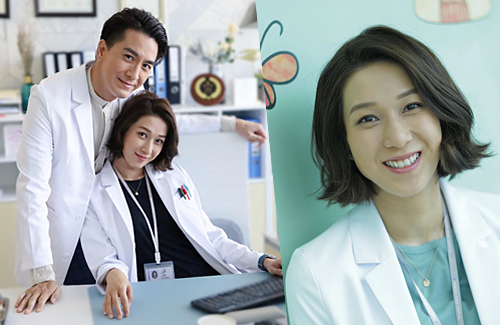 Returning to Hong Kong, Linda Chung (鍾嘉欣) is currently filming TVB medical drama Children’s Hospital <兒科醫生> along with Kenneth Ma (馬國明) and Kevin Cheng (鄭嘉穎). Aside from her eye-popping filming fee of 3 million Hong Kong dollars, what persuaded Linda to agree to film Children’s Hospital was the chance to finally work with Kenneth, whom she has long admired.

Getting married with Chinese-Canadian chiropractor Jeremy Leung in 2016, Linda has focused her energy on raising their two children. Aside from making brief appearances in Hong Kong for brand endorsements, the extent of her onscreen exposure was limited to a cameo appearance in 2018 drama Another Era < 再創世紀>.

Back in the spotlight again in Children’s Hospital, Linda exchanged her traditional long locks for a messy bob in her new doctor role. Posting updates of her filming progress, Linda shared a photo with Kenneth in their white lab coats and shared how excited she feels working with him.

Linda recalled how much she enjoyed watching Kenneth in 2012’s The Hippocratic Crush <On Call 36小時> and revealed that he became her idol ever since. Having become quick friends already, Linda even captioned the photo, “I’ve been a huge fan of Yat Kin Tao [Kenneth’s character in The Hippocratic Crush] ever since I saw him on TV when I was younger. I’m honored to be filming with my idol.”

Linda Chung Breaks Down At the Mention Of Her Kids