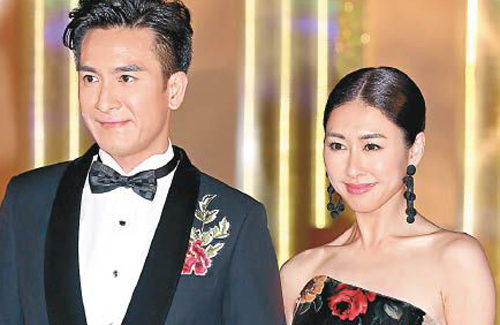 Due to Kenneth Ma’s (馬國明) chivalry in the aftermath of Jacqueline Wong (黃心穎) and Andy Hui‘s (許志安) cheating scandal, Kenneth’s already good image only strengthened further. Hoping Kenneth could find his true love soon, many netizens are rooting for him to get back together with ex-girlfriend Nancy Wu (胡定欣).

Although the two split in 2010, many fans thought Kenneth and Nancy would still be able to rekindle their love in the future. Now with both single again, fans are hinting that they should give each other a chance again. It’s even been said that TVB is planning to have both Kenneth and Nancy star in a new series together.

The last time Kenneth and Nancy collaborated together was Deep in the Realm of Conscience <宮心計2深宮計> in 2018. Despite remaining friends, they actually kept a distance from each other since Kenneth was dating Jacqueline at the time.

In response to the possibility of filming together and rekindling their relationship, Nancy replied, “Thank you for all the concern with regards to my work; I do have an upcoming series. But it’s been delayed for a while now and I haven’t received any news.”

Thanks to his healthy good boy image, Kenneth remains extremely popular among female viewers. During his day off, he was spotted shopping with his mom and was seen taking photos with many of his female fans along the way. During a promotional event for Big White Duel <白色強人>, Kenneth was surrounded by his loving fans as he took a big group photo.

9 comments to Kenneth Ma, Nancy Wu to Film Together?