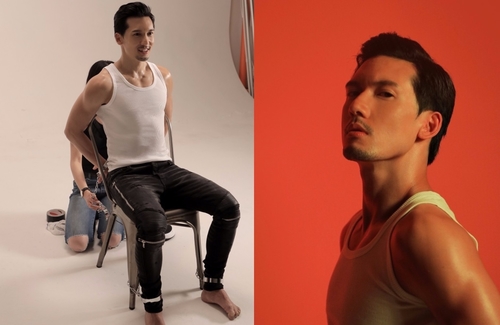 Kenny Kwan (關智斌) released his new Cantonese single “Horn On Your Head” <頭頂有角> on December 10 following the completion of his first solo concert at the Hong Kong Coliseum. The song features rapper SHIMICA, freestyle dancing, and funky animation and graphics. This time, Kenny contributed a lot of ideas for the music video. He said, “The lyrics encourage you to bravely be yourself no matter how weird you are and how different you are. Maybe the weirdest thing about you is your most precious aspect.”

This year, Kenny demonstrated his bravery by trying new things, including his first sex scene on the big screen. As someone who believes he has been very lucky since the beginning of his career, from BOYZ until now, Kenny thanks the many people who support and care for him. “I was the most carefree during BOYZ,” Kenny shared. “Now that I’m a man, I need to be independent and shoulder more responsibilities.”

He continued, “Although I have more responsibilities, I don’t feel tired. Instead, the experience I accumulated during my growth makes me happier.”

His most visible physical change from a young man to a mature man is his muscular physique. Kenny expressed, “It’s more difficult for a thin person to gain muscle than for a person to lose weight. Weight loss can be easily achieved by reducing food intake and exercising, however, people who are naturally thin need to eat a lot of different foods – some that don’t taste good – on top of exercising to build muscle.”

The singer also stressed the importance of putting in all of one’s efforts to reach a goal.

3 comments to Kenny Kwan: From BOYZ to Mature Man