Actor-singer Kenny Kwan (關智斌) is releasing his second pictorial at 39 years old, just 14 years after he flaunted his toned physique in his very first pictorial. This time, he traveled to Tokyo, Ito, and Oshima Island to take photos that showcase his youthful appearance and abs. 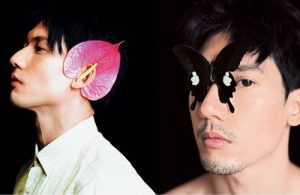 After holding his first concert at the Hong Kong Coliseum last year, Kenny, who has always made an effort to maintain a perfect physique throughout his career, felt that it was time to give fans another pictorial. He wanted to build upon the theme of “searching” since fans at the concert were receptive to the songs that he sang from his 2006 album Mie Wo Sagashite <尋找美惠>, which had the concept of “searching.”

With each photo conveying a different feeling and story, Kenny said, “I wanted to express what happened throughout the years, and my growth while pursuing my dreams. That is why I am calling it Finding a Butterfly, and Becoming a Flower <尋蝶戀花>. The butterfly represents growth when it breaks out of the cocoon, and the flower represents beauty. I want everyone to see my growth through these elements.”

Kenny is Very Concerned With the Way He Looks 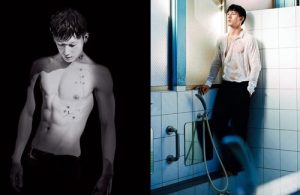 Being the perfectionist that he is, Kenny decided to double down on his exercise regime for the photoshoot. In addition to working out with a personal trainer at the gym, he also exercised at home. A source close to him shared, “Kenny is concerned that his body won’t look beautiful. For this pictorial, he wanted it to be more artistic, so there aren’t many topless pictures, but he wanted his photos in the hot springs and moments where he’s wet to look beautiful.”

Choosing Japan as the Backdrop

Kenny disclosed that the filming progress was very unforgettable, as
he got to work alongside a female photographer who previously practiced her art in Japan. The photographer found a lot of unique locations for them to shoot at, including one charming and mysterious Ito hotel. But Kenny’s favorite shot was taken while he was in the hot springs, not because of the warm water but because the Japanese flowers and the Mount Muji backdrop brought out the mesmerizing Japanese culture. 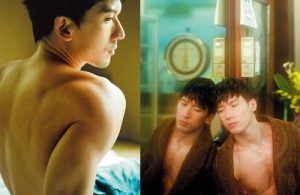 In another set of pictures, the theme was Kyūdō, the Japanese martial art of archery. As Kenney had to learn how to pose from a master, he expressed this particular photoshoot was the most challenging. “Japanese people take a lot of patience and time to master a certain skill, so those poses are not easy to pick up. It was taxing since I needed to immerse myself in the process quickly, and the master was pretty mean. But I am very pleased with the outcome,” Kenny said.

He continued, “It was such an interesting adventure. Everyone just sees the perfect picture, but behind every single one is hard work. It was freezing when we were there, but I needed to [brace the cold] and show the butterfly symbol on my body while biting a rose. It was a good experience because we would always go out for food and drinks afterward.”