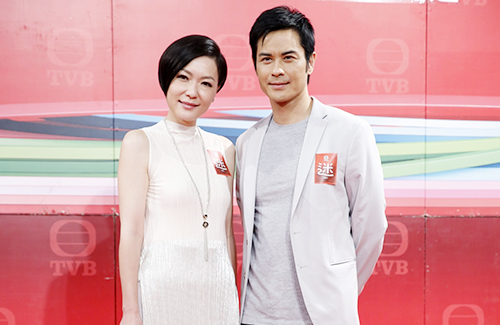 Kevin Cheng (鄭嘉穎), Kristal Tin (田蕊妮), James Ng (吳業坤), Winki Lai (賴慰玲), and more showed up at the costume fitting press conference for the new Amy Wong (王心慰) TVB drama, Lost <迷>. The detective comedy stars Kevin as a cop who, by luck, gets promoted to inspector of police and is put into a unit that handles bizarre cases. Kristal stars as Kevin’s uptight rival.

Kevin said his role in Lost is completely different from his usual roles. His character is a slow thinker and is always several beats behind his colleagues. Kristal, on the other hand, plays the antagonist to Kevin’s hero, and can be quite selfish with a high sense of self-preservation. Kristal shared that while she and Kevin will have a romantic relationship, their characters do not meet until about ten episodes into the series.

Lost is Kevin and Kristal’s first drama together since 2011’s Only You <Only You 只有您>, also produced by Amy Wong.

When speaking about Kevin’s Blue Veins <殭>, which finished its broadcast last weekend, Kevin shared that he watched the series finale with girlfriend and costar Grace Chan (陳凱琳) and her family. They also enjoyed the cake that Grace had baked for the occasion.

Kevin’s decision to pick up another Hong Kong drama came soon, and reporters wondered if his reason for doing so was because he wants to be closer to his girlfriend. He said, “At this point in my career, I choose jobs based on interest. It’s really hard to say. In this industry, it’s hard to predict your opportunities. You never know what happens.”

Lost may be Kevin’s last TVB drama in his contract. Asking if he will renew, he said, “Not that soon. I’ll start deciding at the end of the year.”