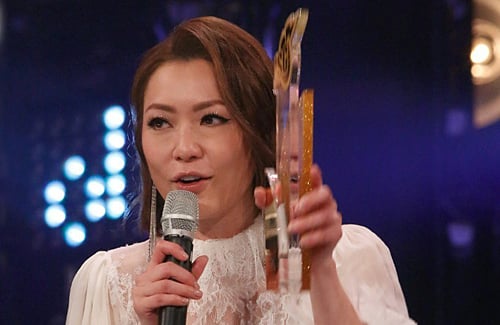 When they announced her name, Kristal was in complete shock and even said, “I honestly can’t believe this! It gave me a scare because I personally didn’t perform the best; it was the marketing team that deserves this award. I want to thank my fans, and the company. I promise to work harder to appear on this stage again!” 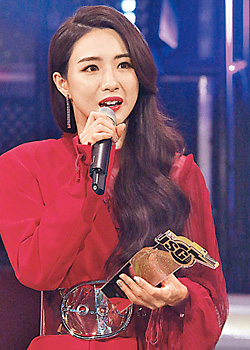 Big winners for the night were Hana Kuk (菊梓乔) for Most Popular Female Singer, with her theme songs from Deep in the Realm of Conscience <飛蛾撲火> and Another Era <只想與你再一起> snagging awards, as well as Hins Cheung (張敬軒) for Most Popular Male Singer, winning nods for his songs “Nothing Without You” <缺> and “Prodigy 1985” <天才兒童1985>.

Jinny Ng (吳若希) also won that night for her theme songs in the Cantonese version of Story of Yanxi Palace <無常青春> and My Ages Apart <別再記起>. This is Jinny’s first time attending such a big award presentation after giving birth to her son. Aside from thanking her boss, she wanted to thank her husband, Alex Ho (何兆鴻), who was supporting her in the audience.