Kristal’s guest of the night was not another singer, but her own 70-year-old father. They performed “You Cheating Heart” together, followed by “The Moon Represents My Heart” <月亮代表我的心> by Teresa Teng. 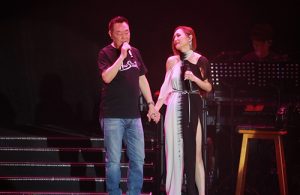 Kristal’s introduction to the entertainment industry happened 26 years ago, when she auditioned for ATV’s fourth annual Future Idol Wars <未來偶像爭霸戰>. Kristal won the competition that year by singing Shirley Kwan’s (關淑怡) “A Solo Song” <一首獨唱的歌>. It was actually Kristal’s father who encouraged her to audition for the show.

“He was the one who dared me to go on stage,” she said. “He told me that if I could go on stage, finish a song, and win the title, then he would quit smoking.”

After Kristal and her father finished their performance, her father joked, “I pushed you onto the stage when you were 15 years old. Now you’re pushing a 70 year old to the stage!”

Being a singer had always been Kristal’s dream. She shared, “The Beatles, Elvis, and Teresa Teng were my childhood heroes. After dinner every night I would grab a hairbrush and use it as a microphone. I’d force my family to watch me sing and dance. No wonder my brother never stayed home! Now, I am holding press conferences at 4 every day. Back then, I was holding concerts at 4 every day!”

During her years with ATV, Kristal was the station’s only managed singer. She had a hand on singing many theme songs for ATV dramas, including the world cup song. “I was the one who sang the theme song to the 1994 World Cup. Can you guess who did TVB’s? It was Leon Lai (黎明)! I guess we were considered equals when I debuted!” she joked.