Having dated quietly for the first couple of years, the pair finally admitted their relationship six months ago after seen going on a vacation to England. According to media outlets, Kenji has been well accepted into Laurinda’s family.

Unfortunately, their love hit the rocks when an alleged third party entered their relationship. What was initially an exciting trip to Hokkaido, Japan quickly turned into a sad breakup for Laurinda.

Not long after the breakup, Laurinda posted a photo of herself on Instragram with the caption stating, “I promised that this is the last time I would cry for you. I won’t hold a grudge and I will keep moving forward. But everything has been fake all along. The most important thing is that I’ll always remember the moment we separated – the last impression you left me. It will remind me that I shouldn’t be so naïve and maybe I will thank you one day. Thank you for teaching me how to love myself a little more!”

While Laurinda only recently announced ending the relationship, many thought her relationship with Kenji was already rocky months ago. Some suspected Laurinda went to Japan with a couple of girlfriends and Kenji only flew over to try to patch things up.

Since Laurinda has been avoiding questions, the media turned to her good friend, Renee Lee (李蘊) instead. Renee expressed, “I’ve seen her instagram and I’ve talked to her. She’s got a large market – no need to be afraid! Laurinda is a very strong girl and we’re not worried about her. Her other half will turn up soon.”

Feeling defensive of Laurinda, Renee spoke rather negatively about Kenji. Renee added, “I’ve seen him a couple of times – he puts up a good façade. However, people change and the woman gets hurt. But it’s not physical pain! Laurinda was really into this relationship – she was good and she did everything a girlfriend can.”

With Laurinda indirectly admitting to their breakup, Kenji’s manager also decided to clear things up. Kenji relayed through his manager, “Yes – we’ve broken up. But that’s all I have to say, I don’t want to say anything else. Thank you for the wonderful years – she’s a really good girl!” 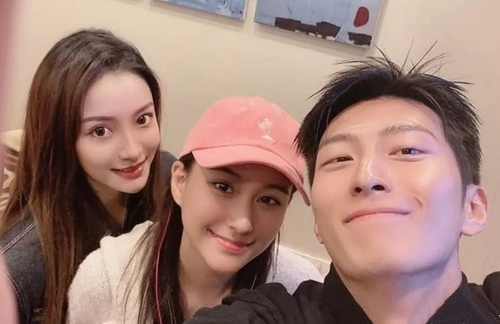