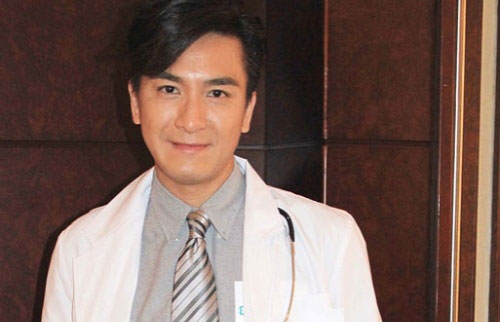 The addition of Lawrence Ng in the cast sparked public interest, especially among the fans of the Healing Hands <妙手仁心> franchise. It was previously reported that TVB planned for The Hippocratic Crush 2 to be a crossover drama with Healing Hands by including Lawrence’s Healing Hands character, Dr. Paul Ching, as a major character. However, Lawrence appeared to be against the idea.

“I want to have fresh image. Since everyone likes Paul Ching, I suggest TVB to invite the original Healing Hands cast and produce a Healing Hands 4!” said Lawrence.

Lawrence revealed that he has already finished watching the first installment of The Hippocratic Crush, and remarked that the drama was too depressing. “Many people died one by one. I hope the second installment will be more cheerful!”

Kenneth Ma disclosed that The Hippocratic Crush 2 will be a continuation of the first one, and it will focus on Tavia Yeung’s (楊怡) and his relationship after their marriage. Eliza Sam (岑麗香) is also added to the cast, and she will share a romantic triangle relationship with Him Law (羅仲謙) and Candy Chang.

Mandy Wong and Benjamin Yuen will continue their romantic relationship that started off at the end of the previous installment, but the couple may encounter some obstacles. Although the script has not been finalized yet, Mandy expressed that she is a fan of Dr. Paul Ching, and she hopes to have a chance to share more screen time with Lawrence in The Hippocratic Crush 2.

Asked if Mandy will recommend herself to the producer to include a kissing scene with Lawrence, Mandy exclaimed, “The script is not finalized, but I want to!”

Kenneth Ma Will Not Vote for Himself

Kenneth Ma’s popularity skyrocketed after starring in The Hippocratic Crush. Although the drama aired at the beginning of the year, his charismatic portrayal of the kind “Dr. Cheung Yat Kin” is remembered by many fans, and the actor will most definitely win a Top Five nomination for Best Actor at the 2012 TVB Anniversary Awards.

TVB implemented a new voting system this year, in which the Best Actor and Actress awards will be entirely voted by the audience. In this sense, Raymond Lam (林峯), one of the most popular idol actors in Hong Kong, will most likely win the TV King title.

Asked if Kenneth has confidence in winning Best Actor, Kenneth admitted, “This year is the first time using the new system, so anything can happen.”

Is Kenneth worried about losing to Raymond Lam? Kenneth smiled and said, “Not really. Only the rules of the game have changed. We will wait for our company’s arrangements.”

Kenneth also remarked that he will not call his friends and family to vote for him, as he finds the tactic to be “disgusting and embarrassing.”