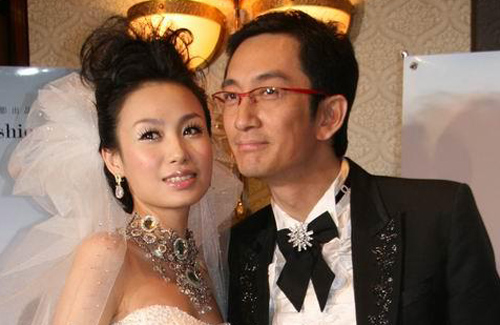 Lawrence Ng‘s (吳啟華) marital problems run deeper than the 50-year-old initially admitted to. On October 29, Lawrence announced that divorce may be inevitable, as he has been unable to resolve differences with his wife, Mainland actress Shi Yangzi (石洋子) for the last four years.

In 2004, Lawrence fell in love with 19-year-old Yangzi on the set of Mainland drama, Shanghai Legend <上海灘之俠醫傳奇>.  In 2007, the couple got married and their daughter was born one year later. Possessing a 21-year age gap with Yangzi, Lawrence hinted that his wife may have regretted marrying him at such a young age and putting her acting career on hold.

Despite his long list of relationship failures and a previous divorce, Lawrence did not consider that the couple’s 21-year-age gap would eventually drive them apart. However, he admits that there are “communication issues”, widened by the fact that the couple has lived separately in the last four years. Yangzi lives in Beijing, while Lawrence has been staying in Hong Kong due to filming for TVB. Their six-year-old daughter resides with her maternal grandmother.

The family would meet up for vacations in the last few years. Although Lawrence just returned from a recent trip to Taiwan with his wife and daughter, the couple is still unable to resolve their marital problems.

Divorce is Only Option

Lawrence felt that it is finally time to end the stale marriage. He shared on his Sina Weibo blog, “As a man, I did not deal with my marriage properly. I can not escape the blame for not shouldering this responsibility! For the sake of our daughter, I did not want to take the last step, but reality and our wishes [are far apart]. It seems divorce is the most suitable option for us.

“I am deeply sorry and sad! I can only strive to raise our daughter to adulthood, and give her the love she needs to minimize her emotional pain. Thanks again to our concerned friends.”

Yangzi may have felt that her marriage with Lawrence had stifled her youth. She recently declared on her Weibo blog that she hopes to act in television dramas once again, and will not depend on Lawrence’s fame to re-establish her career. Lawrence replied, “It’s understandable that she wants to work. She married me and had our daughter when she was very young. Work can give her some [mental stimulation].”

Lawrence denied tabloid reports that claimed Yangzi is involved with another man. The man identified in the reports was Lawrence’s Best Man at the wedding.

Note: This article was updated on October 28, 2014 at 11:40 p.m. to reflect Lawrence Ng’s announcement that divorce is inevitable in his stale relationship with Shi Yangzi.