Lay Zhang Upset After Being Roasted on “Roast!’ Show 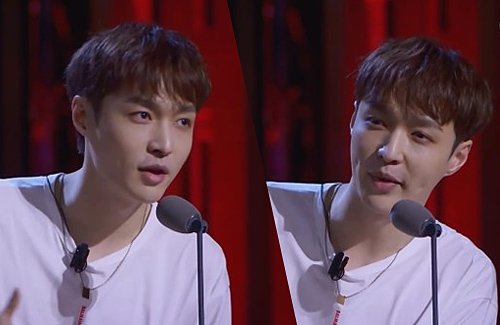 Initially full of smiles on Mainland Chinese variety show, Roast! <吐槽大會>, Lay Zhang (張藝興) slowly lost control over managing his facial expressions and failed to hide his displeasure while being roasted by talk show member, Li Dan (李誕). As the barrage of criticisms flowed, Li Dan saw Lay’s upset expression and had to pause and tell him to not get angry.

The video circulated, and netizens largely discussed how it appears Lay truly got angered. Some felt the awkward atmosphere and talked about how he couldn’t control his expressions, while fans were distressed in seeing Lay being hurt and commented that he should retaliate immediately.

Targeting Lay, Li Dan roasted him on being too full, lacks balance and described him as a music micro-business owner. Referring to how MC Jin (歐陽靖), an Asian American rapper, has been developing his career in Mainland in the past year, he laughed how people in the country are trying to venture out while outsiders are trying to come in. He finds it so fascinating and said it’s making music look like a commercial trade. He pressed on Lay saying, “Lay’s songs revealed in the country are rejected overseas, and so it can only be brought back to be sold. These kind of songs are called excess stock.”

Knowing that his words would make a definite blow to Lay and noticing his upset reaction, Li Dan quickly tried to save the situation by waving to Lay and calling out multiple times, “Don’t be angry, don’t be angry, you let me roast you harshly! Don’t be angry!”. He then honestly said, “After making this kind of joke, I really can’t face Lay again. He is a professional producer, and me who knows nothing is here saying this is not good, that is not good.”. But not soon after calming down the relatively tense atmosphere, he continued on his roast, “The things you say lack balance. You talk too full!”

Lay, who has been struggling to manage his expressions, went up next to retaliate. Forcing a smile, he said he knew participating on the show would not be easy, and expressed a lot of confidence was needed to join. It was especially needed because artistes are forever loved and protected by their fans, and he was curious what others thought of him. He thought facing criticisms would help him reflect and better discipline himself, but he smiled and said, “After coming here, I’ve realized it’s better not knowing.”

Showing confidence in his songs, Lay said, “I’ll really be happy for everyone to give my songs a chance and listen to them. My songs really aren’t that bad.” Facing everyone who roasted him earlier, Lay joked, “Can every one of you go back and listen to my songs 10 times. After roasting me, can everyone buy 10 albums for me? Thank you, Thank you.”

7 comments to Lay Zhang Upset After Being Roasted on “Roast!’ Show