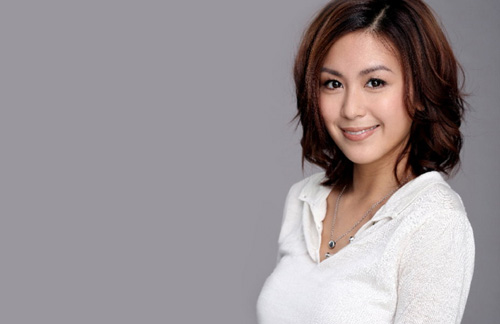 Since last year, City Telecom’s (CTI) Ricky Wong (王維基) has been busily recruiting artists to join the new Hong Kong television station. It was rumored that Ricky offered a vast 7-figure sum to persuade former TVB actress, Leila Tong (唐寧), to join CTI recently. Allegedly, Leila’s filming fee increased by $20,000 to $30,000 HKD per episode.  It was understood that Leila already signed a contract with CTI last month. In high spirits, Leila was interested in purchasing an environmentally friendly car to reward herself. The day before yesterday, Leila and her manager appeared at a car dealership in the Wan Chai district. Looking through the glass doors for a lengthy amount of time, Leila finally entered the car dealership to ask some questions. The trio chatted for a few minutes, after which Leila left without test driving any vehicles.

In a telephone interview, Leila admitted that she intended to spend $600,000 HKD on a new car. However, the car that she had in mind, a 7-passenger environmentally friendly car, was not launched in Hong Kong yet.

Asked whether she intended to join Ricky Wong’s CTI television station, Leila indicated that she did not wish to respond on the matter at this time.

Jayne: I am interesting in seeing Leila again. Perhaps motherhood will add a new dimension and make her performances more mature than the cute roles she had played.

44 comments to Leila Tong Signs With City Telecom; Rewards Herself With New Car