Linda Chung Will Chase for Baby No. 2 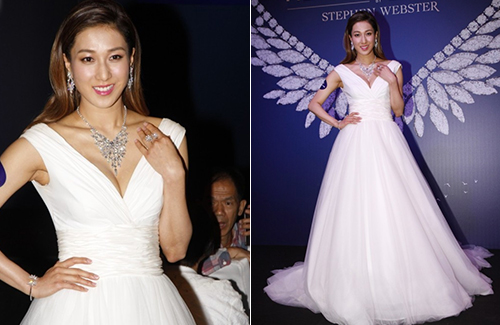 On Friday, Linda Chung (鐘嘉欣) showed in Hong Kong to attend an event for a jewelry brand to showcase its latest collection. The 32-year-old actress wore a beautiful white dress with a plunging neckline, like she’s back in her wedding dress.

Linda, whose family resides in Canada, returned to Hong Kong just for the event. The actress flew back home on Friday night.

Unlike many of her peers, Linda does not mind flying back and forth. “I’m able to sleep in the plane, so I don’t find it tiring. I actually consider it my short break. Because I’m breastfeeding now, I can’t stay [in Hong Kong] for long. I came back last night, and will be going back tonight.” Linda plans to breastfeed her daughter, Kelly, until she’s one year old. “Kelly is used to her mother being gone once in a while. Her grandparents take care of her during those times.”

Has breastfeeding increased Linda’s cup size? “They were the most bloated in the first two months, but they seem to adapt to how much my daughter needs. It hasn’t increased too much. I didn’t need to buy new bras at all.”

When Linda’s not at home, she would communicate with her daughter via video message. Kelly’s starting to recognize her mother’s face on the screens now, and would acknowledge her. “She’s half a year old now, so it’s the cutest time. She’s starting to eat thicker food, and she’s rolling around! She can’t crawl yet though, but my husband and I think it’s a good thing that she hasn’t learned how to do that yet. I don’t want to be in the middle of cooking something and then realize that she’s wandered somewhere else.”

Asking if Linda would like to have another child, she said, “Yes. My husband and I plan to start chasing for another after Kelly is around two years old. That gives me just the right amount of time to love Kelly. Now that I’m older, I’m starting to see that love equals to time. Time can’t be bought with money, no matter how much I make.”

Linda, who turned down Heart of Greed 3 <溏心風暴3> to take care of Kelly, said she would be interested in returning to TVB dramas, if the time is right. “I’m actually in talks to do another drama project, but I don’t think I’ll be able to commit to such a long project in the meantime.”

12 comments to Linda Chung Will Chase for Baby No. 2