When Louis Koo (古天樂) and Raymond Lam (林峯) filmed the TVB series A Step Into the Past <尋秦記> in 2001, tabloids speculated that they were on bad terms. Louis was reportedly not fond of Raymond’s physique and tanned skin colour, which he believed was a carbon copy of himself. However, he will reportedly produce a film version of the drama next year and has invited Raymond to be a part of it, disproving their previous rumors of discord.

According to sources, Louis hopes the original cast will star in the new film. Earlier, he was spotted together with Raymond and several veteran actors at a famous restaurant in Causeway Bay. Louis acted like an elder brother and had his hand on Raymond’s shoulder. They seemed to be great friends, and even wore shoes of the same style.

At around 9:00p.m. that night, reporters first spotted Sean Lau’s (劉青雲) car parked outside the restaurant. One hour later, Sean, Francis Ng (吳鎮宇), and Cheung Tat Ming (張達明) stepped out of the building with red faces, and it is assumed that they had been drinking. When the group caught sight of reporters, Sean remained low-profile while Francis generously smiled and greeted the press. Battling cancer, Tat Ming possessed a skinny figure, but seemed to be in good spirits. Sean drove Francis home since they both live in Sai Kung, while Tat Ming waved down a taxi.

Louis and Raymond did not exit the restaurant until 11:00p.m. Their faces were also red, and it was evident that they had been drinking as well. Louis was dressed up in a Thom Browne jacket and Dsquared jeans. His Valentino sneakers are estimated to cost $5300 HKD. Raymond wore a similar style of shoes, although the colour was slightly different. When approached by reporters, Louis admitted the group had been discussing big plans. 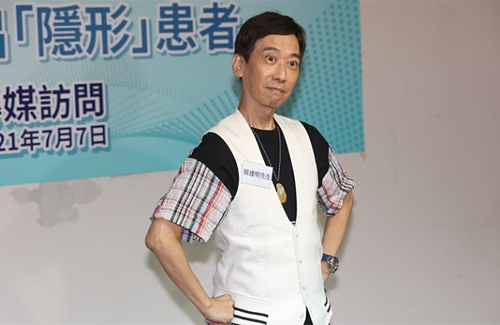 When he was diagnosed with cancer, Cheung Tat Ming felt that his world fell apart.