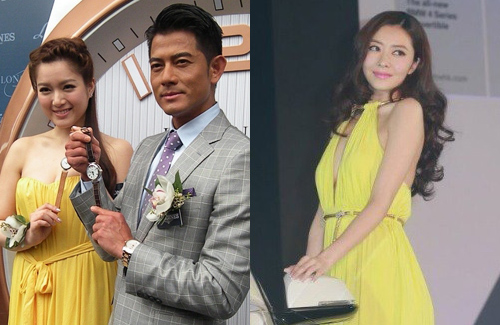 Lynn said she was not worried about her chest getting exposed, explaining, “I really like [the dress]. I’m not wearing anything underneath, so there’s nothing to be exposed. Usually when you get exposed it is the protective covering that gets seen. I taped the important areas. There’s no need to be worried.” Lynn added that her agency was the one who chose the yellow dress for her.

Earlier, Aaron Kwok and rumored flame Christine Kuo attended an event where she was also seen wearing a yellow dress. Lynn explained that the color clash was merely coincidence and added that yellow is currently in season. She also said that while she has looked over some of the gossip reports about Aaron and Christine, she did not notice the color of Christine’s dress at the time.

Mentioning that Aaron praised Christine to be a goddess, Lynn was asked if Aaron also did the same to her. “Many people have praised me,” said Lynn with a laugh. “Many people still do.” Asked if she has received any flowers by a special person on White Day, Lynn sighed, “I haven’t found one yet. I actually didn’t even know it was White Day. If I knew about it, I would have gotten that person to praise me, haha!”

Recently, Lynn opened an Instagram account and is following about 50 people. The press pointed out that Aaron opened one last September, and among the 118 users he is currently following, 18 of them are psuedomodels. As for her thoughts about Aaron following psuedomodels, Lynn said with a laugh, “I really don’t know how to respond for him. The ones I add are all my friends or artists who I admire. I don’t know what to say about who he’s adding.”

Does Lynn believe that Aaron is meeting younger girls? “It’s none of my business.” She then added that she prefers mature men, “Wouldn’t it be ridiculous if you act like a child at 60? Of course, I don’t mind being with someone who is younger, as long as he knows how to take care of me.”