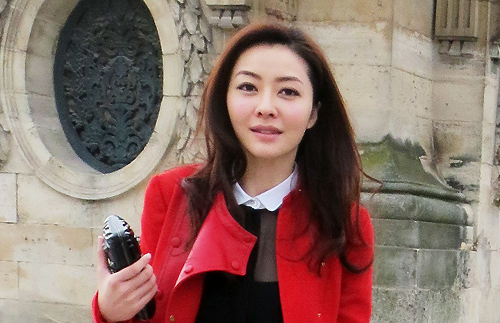 The former couple met in 2006 on the set of Aaron’s music video and had since survived many negative gossips throughout their 7-year journey. Lynn had always dreamed of marriage and was close to making it come true until her father’s death in January. With their wedding plans on hold, and news that Lynn had moved out of her home with Aaron, many smelled trouble brewing.

With a new $4.5 million HKD home and a $800,000 HKD Range Rover, new reports suggested that Lynn was involved with a rich tycoon and ultimately chose him over Aaron. Rumored to be Pace Wu (吳佩慈)’s former boyfriend, the man was introduced to Lynn at an overseas event last year and has since been showering Lynn with expensive gifts. Sources further revealed that Lynn accepted this man’s advances because she is getting older and wanted to give herself more “options”.

Lynn addressed the latest accusations on Weibo today, “[You] want me to clarify? I will not waste my time. Regarding these malicious slanders, all I need to say is, show me the evidence even if they’re just photos with a lookalike. I will not deal with this otherwise. Also, thanks everyone for your concerns. I am doing well and [I’m sorry] for worrying you.”

Christine Kuo, who denied being the third party in Lynn and Aaron’s relationship, was reported to have moved into a residential building in Happy Valley where Aaron’s mother currently lives. Sources claimed that Aaron’s mother likes Christine very much and Aaron had arranged for Christine to move next door to keep his mother happy.

Responding to the latest claim, Christine told reporters, “I didn’t know I am moving until I read these magazines! They have even found a place for me.” Christine denied the rumors and stated they are not true. She also refused to comment further about related gossips.