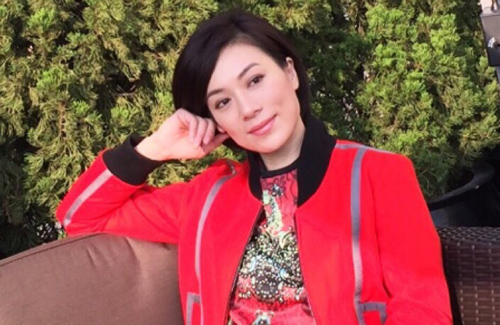 On January 2, Maggie and Leonard dined at a high-end Italian restaurant in Tsim Sha Tsui. They sat on the same side of the table and were engaged in conversation for the next two hours. Maggie was very expressive and smiled a lot.

Reportedly, the two conversed in a mix of English and Cantonese. Maggie also spoke a few words in French. Leonard was very attentive – when he noticed that Maggie was cold, he helped her put on a jacket and ordered a hot drink for her. Maggie also paid the bill.

Leonard, who is of mixed French and Chinese heritage, has been working as a designer in Hong Kong for a few years. They met each other through a mutual friend approximately a year and a half ago, when Maggie was visiting France for vacation. Leonard acted as Maggie’s tour guide while she was in France, and the two clicked almost immediately. They two kept in contact after Maggie returned to Hong Kong. They only started dating half a year ago.

On January 3, Maggie was seen shopping for men’s clothing in Tsim Sha Tsui. She also shopped for bedsheets and other home appliances. On January 5, Maggie met with Leonard again, and they had brunch with a few other friends.

In a phone interview, Maggie denied dating Leonard, but did say they are very close friends.  Commenting that she met with Leonard a few times the past week, Maggie said, “I don’t think that’s very frequent. It’s normal to go and eat out with friends.”

Asked if it is possible for their relationship to develop further, Maggie said that it is still too early. “I don’t even know myself….”

Would she be against dating a foreigner? Maggie admitted that she  actually prefers dating foreigners. “I want someone who can give me space. I enjoy my work, and I think foreigners are more understanding of this compared to [men]from Hong Kong.”

Maggie also said she does not mind dating a younger man. “If he’s not older than you, then he’s younger than you.”