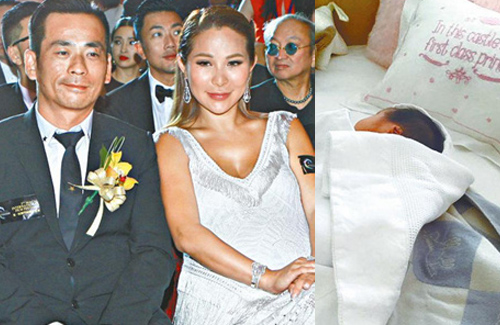 After the birth of Mandy’s daughter, Heidi’s friend Tiffany Chan (陳嵐) accused Mandy for leaking the information to the press about her giving birth in London with Alvin to provoke Heidi, calling her actions malicious. Heidi also broke her silence on the issue and said, “I’ve never liked fighting over things with anyone. If you like them, then take them. If you can take them, then take them.”

Although Heidi was well aware of Mandy’s relationship with Alvin, a source said that she did not believe in Mandy’s pregnancy until after the news of her daughter’s birth was leaked to the press. Alvin had a big fight with Mandy over the matter.

To apologize to Heidi, Alvin purchased a $100 million HKD mansion in Macau to give to Heidi. He also promised Heidi that for the time being, he would not visit Mandy, who is still in London. Heidi also stipulated that Mandy cannot return to the Hong Kong/ Macau region for the next two years.

After the birth of Damiana on May 30, Alvin would travel to Hong Kong from Macau every day to visit his wife and daughter in the hospital. Alvin’s older sister also visited Heidi.

Heidi finally left the hospital on June 4, but Alvin, who left earlier that morning, was not by her side. Heidi smiled for the press and even posed for pictures. When asked about her daughter, she politely refused to comment.