With the arrival of summer, many celebrities have been taking advantage of the good weather and heading out to sea. Michele Reis (李嘉欣) was seen aboard her family yacht with husband Julian Hui (許晉亨) and their son, revealing their incredibly luxurious yacht.

Turning 50 on June 20, Michele was in good spirits recently and went out to sea with her family despite warning of rainstorms. Sharing a photo online, Michele wrote, “The weather isn’t good, but everything will be fine as long as the three of us are together.”

At an estimated value of $100 million Hong Kong dollars, Michele and Julian’s luxurious yacht is made by Italian brand Azimut, one of the most well-known luxury yacht brands in the world. Constructed of carbon fiber to further increase its stability, Azimut has five lines of luxuy catered to different needs. 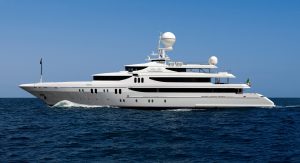 While Michele’s family yacht has many luxurious amenities, her former lover Joseph Lau’s (劉鑾雄) yacht came with a jaw-dropping price of HK$700 million. Purchasing it as a gift for his mother in 2010, Joseph Lau named it “Lady Lau”. At five stories high, the yacht has elevators and an 100,000-square-foot interior. Made by Italian brand Codecasa, which is known for their meticulous craftsmanship and custom-tailored design, the company makes no more than five yachts every year. Due to the extremely large size of “Lady Lau,” Hong Kong did not have any marina docking spots to accommodate it. After five years of ownership, Joseph sold the yacht for HK$400 million and the new owner changed its name to “M.Y. Double Down”.