Michelle Ye and Boyfriend Kiss and Touch in Public 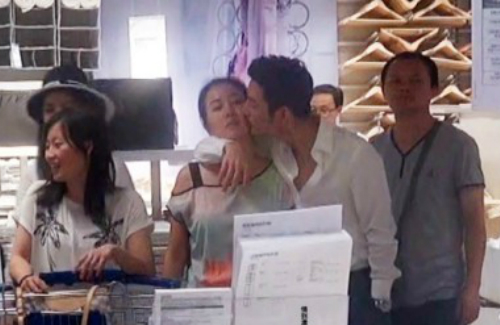 Love has been extremely high-profile between Michelle Ye (葉璇) and her fashion stylist boyfriend, Mr. Little Mo (小默先生) lately. The couple publicly showed their affection for each other while shopping in a large home goods store in Beijing. In a previously aired episode of The Jin Xing Show <金星秀>, Michelle even happily claimed she has found the perfect man.

Wearing little makeup and with her hair pulled back in a ponytail, Michelle was very intimate with her boyfriend throughout their shopping trip. Mr. Little Mo constantly put his arms around her shoulders while they looked around at various merchandise. The couple appeared to be interested in most items, including bed-sheets, pillows, and potted plants.

Mr. Litte Mo not only kissed Michelle, but also touched her butt in public. They did not seem to mind showing off their love, although Michelle’s assistant also tagged along and there were many other shoppers nearby. The couple then held hands and affectionately gazed into each other’s eyes. Michelle’s assistant appeared indifferent towards their intimacy, as if she is already used to it.