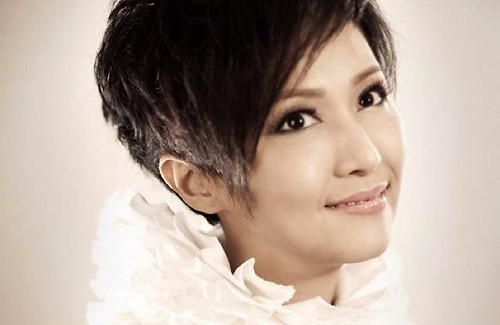 Singer-actress Mimi Lo (羅敏莊) recently announced that she will not be renewing her TVB contract after it expires in August 2013.

Mimi and husband Power Chan (陳國邦), also a TVB actor, attended a press conference in Tseung Kwan O for an upcoming TVB television program. At the conference, Mimi revealed that she is not planning to renew her TVB contract after it ends in August.

“I am still considering,” said Mimi. “But there are too many people here. I don’t think I will renew [my contract].”

Mimi joined TVB in 1996, after winning “Best New Female Singer – Silver” at the Ultimate Song Chart awards that same year. She has starred in numerous popular television dramas, including Blade Heart <血薦軒轅>, The Last Breakthrough <天涯俠醫>, Under the Canopy of Love <天幕下的戀人>, Wars of In-Laws II <野蠻奶奶大戰戈師奶>, and the D.I.E. <古靈精探> series. Mimi has starred in three musicals and has released thirteen music albums. Her most recent album, I Did It <我做到>, was released in March 2012.

Asked if her husband will also follow suit, Mimi stated, “We have different jobs and we all do our own thing. His contract ends at the end of the year. The managers have not talked about renewing his contract with him yet, unless they are afraid that he is planning to leave as well. I don’t think TVB thinks he’s very important to them anyway,” Mimi added jokingly.

Unlike Mimi, Power expressed that he wants to continue his current work relationship with TVB, and is planning on renewing his contract when the time comes.

41 comments to Mimi Lo Will Not Renew TVB Contract