In The Exorcist’s 2nd Meter <降魔的 2.0>, Moon Lau (劉佩玥) reprises her role as Bella who dedicates her existence to protect Kenneth Ma’s (馬國明) character. Many fans are drawn to Moon’s bubbly character and they dubbed Bella as their “ideal girlfriend”, but the actress disagrees with the label. Reflecting deeper on her qualities, she shared her perspective on her romantic life and career.

Moon joked that she would not be an ideal girlfriend because she is a tomboy, and she doesn’t know how to cook or put on makeup. Realizing that she does have other good qualities, Moon said, “I can endure hardships with my boyfriend. I can eat different things, and I would be a good companion. I listen well. Everyone has their positive and negatives, and it depends on what you prioritize. Some think cooking is very important, but if [he] cooks, I can do the washing.”

In a relationship, Moon would be rational and that’s why she never went crazy over a boy. Reflecting on her own dating experiences, Moon shared, “Thankfully, all of my previous boyfriends treated me well so I never did anything that I wouldn’t have expected. At the same time, I don’t think that relationships should be like dramas where separating and reconciling are called passion. A simple love is the best.”

At the age of 30, Moon revealed that her criteria for a partner changed, “In the past, if you asked me what kind of boyfriend or husband I would like, I would have answered someone who is athletic, filial, loyal, has a sunny outlook, and can sing and play ball. Now the criteria is higher, I need someone who can make me happy, and can put my heart at ease. The external criteria are not important. What is more important than not having to be suspicious when you’re together and you relax and be yourself? This is the most important. A beautiful appearance will pass with time. You will continue to age. Your money may change overnight, but your heart will not.”

Will Only Announce Serious Relationship to Public

In recent years, Moon was rumored to be linked with Adrian Chau (周志文) and fans are curious if Adrian lives up to Moon’s criteria.  Moon replied, “I think he’s a very good man. He is very understanding and he is able to calm my mood. I have experienced things in recent years, and after growing up, our relationship is getting better and better.”

Although Moon complimented Adrian, Moon confessed that she believes that publicly confirming a relationship is an important matter, “I’ll rather have just gossip. It’s better than being seen photographed with other men and then being called a cheater. I don’t want people to think that I am always changing [partners]. A public announcement can’t be treated like a game. It’s a reputation. So I hope that once the relationship is stable, there is certainty and everyone’s goal is on the same boat, then I will announce [the relationship].”

As second runner-up in Miss Hong Kong 2013, Moon was often compared to other pageants such as Grace Chan (陳凱琳) and Sisley Choi (蔡思貝) who have found their own successes. Moon shared that she is happy for them, but she will not envy, nor compare herself with people, “I am a person who likes to enjoy the scenery along the road. I wanted to be a director when i was young, but along the road, I found something new. I tried it, competed for Miss Hong Kong and became an artiste. These [changes] are unpredictable. I think the scenery along the road is more important than the end of the journey. I enjoy what I have now, and I am satisfied. I need to focus on my own path.”

Many people regard actresses who competed in Miss Hong Kong as “vases”, a term for actresses who look pretty but are lacking in talent. Moon revealed that she wanted to be a useful “vase” and said, “I don’t have outstanding facial features. When I was a child, I accepted my own imperfections, and learned to turn my own shortcomings into strengths.”

Moon understood that she should always find ways to improve herself and recently enrolled in an art class. “In fact, I went to learn to sing, compose, write lyrics and rearrange music. I dare not say I will be a singer, but I hope to have a new experience such as composing a song for singers.”

If it wasn’t for her costar Karl Ting, Moon Lau would’ve been in deep trouble. 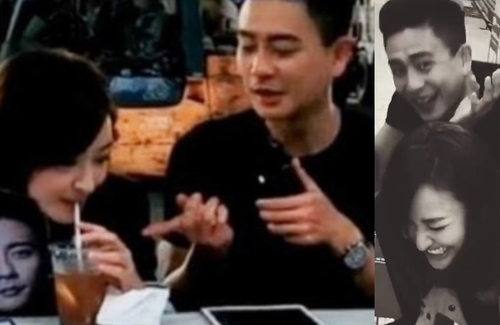 Bosco Wong’s fans are not happy with Jeannie Chan’s actions.