Myolie Wu Plans to Move Out of Bosco Wong’s Building 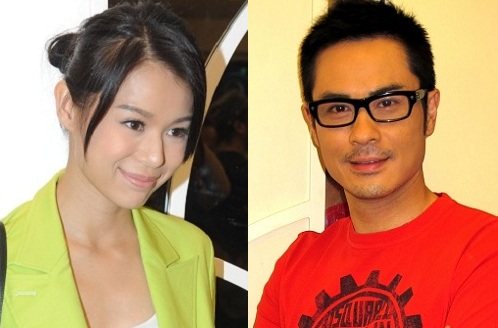 Highly anticipated TVB drama, Ghetto Justice 2 <怒火街頭2> aired on Monday, July 30th in Hong Kong. Myolie Wu (胡杏兒), Kevin Cheng (鄭嘉穎) and the cast and crew gathered together to watch the premiere episode over dinner on Monday evening. Announcing her breakup with Bosco Wong (黃宗澤) last week, Myolie was swamped by reporters eager to cover the latest “Boscolie” developments. Myolie indicated that she plans to move out of Bosco’s residential building when she has the opportunity to do so.

Myolie to Move Out of Bosco’s Building

Myolie’s spirits appeared to have improved. Despite Myolie’s romantic rumors with Jin Yu Man Tang <金玉滿堂> costar, Eric Huang (黃少褀), under close scrutiny, she continued to deny that Eric was the reason for the “Boscolie” breakup. Stating that the paparazzi has been closing following her in recent days, “no man” has been able to get close to Myolie.

Bed photos from Myolie and Eric’s love scenes in Jin Yu Man Tang have surfaced. Oriental Daily claimed that the pair kissed for 5 minutes during the filming of their kissing scene, in which they surprisingly did not stop kissing once the cameras were off. When Myolie was filming in sub-zero weather, Eric allegedly brought her hot coffee to drink. A witness stated that Myolie and Eric discussed their script together inside the hotel room, demonstrating their intimacy. They have also gone on karaoke gatherings together. Eric posted several photos of Myolie and himself on his Weibo blog, and often exchanged Weibo messages with her online.

Asked whether she felt taken advantage of by Eric Huang in their kissing scenes, Myolie said, “I will not think of it this way.” She added, “I know that everyon is very concerned about the breakup. Thus, I thought of many ways to announce it earlier, hoping to stop unecessary speculations.”

Myolie will be concentrating on her work and putting aside love matters. After completing TVB drama, Season of Love <戀愛季節> with Kenneth Ma (馬國明), Myolie will film Triump in the Skies 2 <衝上雲霄II> in August.

Due to Kevin Cheng’s immense popularity in mainland China and skyrocketing earnings, he treated the cast and crew to dinner last night. Kevin was asked to comment on the recent promiscious rumors of Bosco Wong, Ron Ng (吳卓羲), and Raymond Lam (林峯), in which the three actors were implicated in various scandals with busty mainland Chinese actresses. The Hong Kong media has currently branded mainland Chinese actresses as femme fatales, causing the downfall of Hong Kong actors. Kevin indicated that he was not afraid and will be mindful of his own behavior. He jokingly said, “No one is interested in me!”

This article was revised on July 30, 2012 at 5:25 PM with additional details regarding Myolie Wu’s intention to move out of Bosco Wong’s residential building.

Jayne: It is a good thing that Myolie’s current relations with Bosco not being as atrocious as speculated. Filming “Triumph in the Skies 2” will likely last through November, in which Myolie will remain in Hong Kong. Bosco should be done filming “The Woman Above the Bread Tree” by August…what will be his next filming project? Hopefully they have the back half of the year to spend more time together and possibly sort things out.