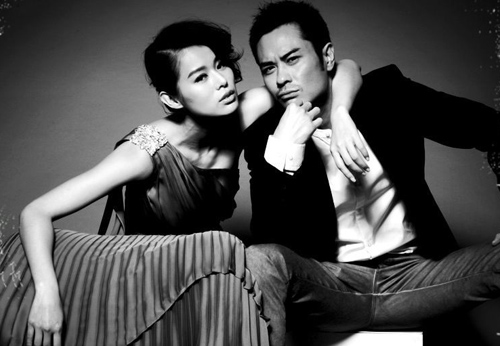 Ghetto Justice 2 <怒火街頭2> premiered on Monday, July 3oth to much fanfare. Following its successful run last year, the sequel has pulled strong ratings and excited the audience. While Myolie Wu (胡杏兒) has been the center of media attention recently due to her break-up with Bosco Wong (黃宗澤), she remains focused and committed on her work.  In an interview with TVB Weekly, Kevin Cheng (鄭嘉穎)  and Myolie spoke about revisiting their characters one year after filming the original TVB drama. Kevin and Myolie displayed their natural chemistry together as costars, revealing the inside scoop on their intimate scenes.

Kevin said, “The ‘Law Ba’ character was very well received by the viewers. In the sequel, he continues to be the laid-back and obnoxious lawyer that everyone grew to love and hate. On the flip side, Myolie’s character changed significantly after Law Ba went to prison. While managing Law Ba’s law practice, she matured and became passionate to help out the community in Shum Shui Po.”

Compared to filming the original Ghetto Justice, Myolie also acknowledged that filming the sequel was much smoother because the cast knew each other better and was more at ease.

In fact, when asked about filming the initimate scenes with Myolie, Kevin said, “At first I wasn’t sure how we were going to pull it off. Myolie was really nervous. When the cameras started rolling, she really got into character with a ‘do it or die’ kind of mentality. Since she was so immersed, of course I had to roll with the punches!”

Myolie added, “In the first series, our characters were enemies who turned into lovers, so there was much more bickering between them. But in the sequel, they are already a committed couple, so there are more tender and sweet moments between them, like a real life couple.”

Viewers may remember one scene when Kevin slapped Myolie’s buttocks in the premiere episode of Ghetto Justice 2.  Kevin takes credit for that scene, noting, “Since Myolie’s nickname in the series is ‘Law Yau’, I thought it would be funny to slap her butt. Of course, I had her permission to do so! But it’s only with Myolie; I wouldn’t dare to do that to another actress!”

Although it seems like the onscreen couple has many sweet and funny moments, their relationship will face the ultimate test with the addition of Christine Kuo’s (苟芸慧), character. Myolie and Kevin had nothing but praise for the newcomer, noting that Christine tried really hard to study and practice her lines despite her accent.

Myolie and Kevin’s back and forth banter during the interview shows how comfortable and at ease they are with one another. When translated onto their onscreen performance in Ghetto Justice 2, viewers can enjoy their wonderful chemistry and see a more natural progression in their characters’ relationship.