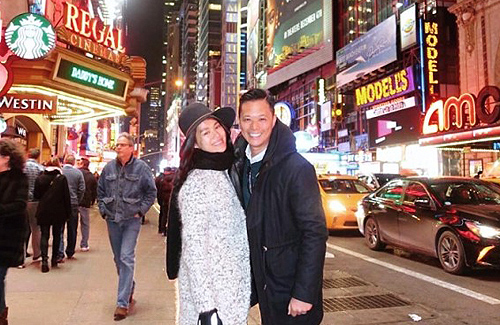 After getting married last December, Myolie Wu (胡杏兒) and Philip Lee (李承德) immediately embarked on their two-month long honeymoon around the world. Having gone for a skip trip in snowy Hokkaido, and enjoyed a fishing expedition in Tahiti and New Zealand, the couple’s current stop is New York City.

Earlier today, Myolie posted a photograph of the couple standing in the Times Square district of Manhattan on Instagram. In the photograph, the couple was basking in their newlywed bliss. Myolie, in particular, looked radiant despite not having any makeup on.

Having wrapped herself up to guard against the cold winter, Myolie also appeared slightly rounder in the photograph. A netizen immediately left a comment, joking that Myolie may already be pregnant.