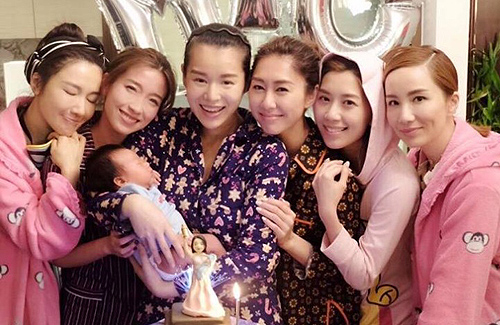 Since giving birth to her son Brendan in October, Myolie Wu (胡杏兒) attended her first public event. The radiant first-time mother seemed to have returned to her pre-pregnancy weight already. However, Myolie clarified that she still needs to work on losing a few more pounds.

Having just completed her post-pregnancy one-month confinement, the 38-year-old actress was quick to return to work. “I didn’t think it was going to be so quick either. I was just thinking about having the opportunity to see Sun Li (孫儷).”

Known for being a sweet and caring husband, did Philip Lee (李乘德) insist that she take more time to rest? Myolie said, “He lets me decide. I’m afraid of being bored and breastfeeding is very exhausting. There is no time for sleeping. I’m giving my baby boy all of my fat and water content. He’s nearly 12 pounds!”

Although she intends to return to work, will she be reducing her workload to be a more involved mother? Notorious for being a workaholic, Myolie said, “I can’t accept any jobs that require an extended amount of time. I have to breastfeed for half a year. I hope to be a working mom though, so I will work part-time.”

Earlier, it was reported that she breastfeeds in front of her girlfriends in the Nonsense Club. Though the issue of breastfeeding in public remains controversial, Myolie shared, “Yes, I’m very open [about it]. It is convenient for me at home and I’m very close to my girlfriends. I was afraid of scaring them, because [my breasts] are so large now! I want to encourage them to breastfeed too.”