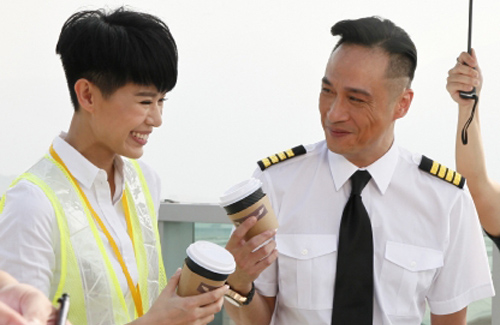 Myolie Wu (胡杏兒), Chilam Cheung (張智霖), Francis Ng (吳鎮宇), and Fala Chen (陳法拉) filmed scenes for Triumph in the Skies 2 <衝上雲霄II> at the Hong Kong International Airport yesterday. Since the cast will be filming on location in France and Great Britain in November, Myolie and Fala will be unable to join the TVB Anniversary Gala celebration. However, they will return in time for the December Anniversary Awards.

Due to TVB’s implementation of the one person, one voting system to select the winners of the Anniversary Awards, artists have been urging the public to vote for themselves. Due to the strong competitors this year, Myolie felt that she will not have a chance to win the TV Queen award for the second consecutive year. “I’m am not in the big war this year. I still hope that everyone submits a vote for me; the most important is that I am not in the last position!”

Asked whether she felt that ex-boyfriend, Bosco Wong (黃宗澤) had a good chance to win the TV King title due to the popularity of Witness Insecurity <護花危情>, Myolie said that she supported Kenneth Ma (馬國明) instead.

Chilam Cheung’s public scolding towards the Triumph in the Skies 2 production assistant staff generated a backlash towards the 41-year-old actor’s intolerant attitude. Some netizens attacked Chilam for stepping upon a lowly paid production assistant’s mistakes, while not criticizing TVB management for inadequate staff placement.

Since Chilam’s second message noting that “He should be the one to apologize,” many regarded his words to ring with sarcasm. Known for his high EQ and rare to spit fire publicly, Chilam’s emotions appeared to have calmed down over the production assistant scandal.

Chilam recently attended Dayo Wong’s (黃子華) stand-up comedy show at Hong Kong Coliseum, which improved his spirits. In Chilam’s Weibo post, he wrote, “Thanks to Dayo Wong’s excellent performance and the laughter of ten thousand audience members, allowing me to realize that the world is still beautiful! Tomorrow is a new day. I will continue to film Triumph in the Skies 2 with a positive attitude. When problems arise, we solve them and put them behind us. This is the mark of a man! I wish to share with all my colleagues.”

Francis Ng did not discuss the production assistant scolding with Chilam. Francis said, “If we were to talk about it more, then it will become a big issue. These type of things always happen. They just got magnified in the Weibo community.”

Despite their twenty-year gap, Fala Chen and Francis Ng will have a romantic arc in Triumph in the Skies 2. Wearing their pilot uniforms while filming in the airport, Fala and Francis clasped hands.

Fala dismissed rumors that Francis was difficult to get along with on set. Although Francis’ pilot characteris serious, he was playful towards Fala and Myolie during filming. Fala regarded Francis as her sifu both onscreen and offscreen, allowing her to improve her acting skills.

49 comments to Myolie Wu, Chilam Cheung, and Fala Chen Film “Triumph in the Skies 2” at Airport