In the blink of an eye, Myolie Wu‘s (胡杏兒) second child, Ryan Lee (李奕霖), is nearly three months old. It was only last July when Myolie and her husband Philip Lee (李乘德) announced the arrival of their newest family member. To celebrate the joyous milestone, the couple threw a blue skies and white clouds-themed party for their son.

A lot of celebrity friends were invited, including singer Phil Lam (林奕匡) and his wife Rikko Lee (李靄璣). The couple both shared photos from Ryan’s 100-day banquet on their respective Instagram accounts, and Sarah Song (宋熙年) and her son Damon were spotted in some of the pictures. Lai Lok Yi (黎諾懿) also brought along his son Little Spring Chicken (小春雞), as well as his wife Nicole Lee (李潔瑩). Lok Yi and his family huddled together for a group photo with Myolie’s family of four. In the photos, Ryan was seen sitting obediently. 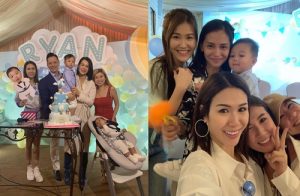 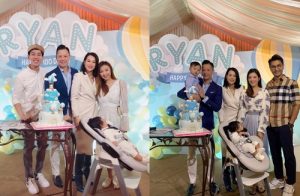 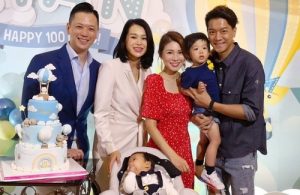 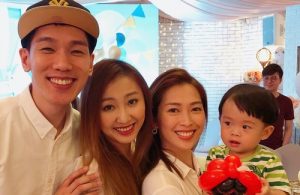