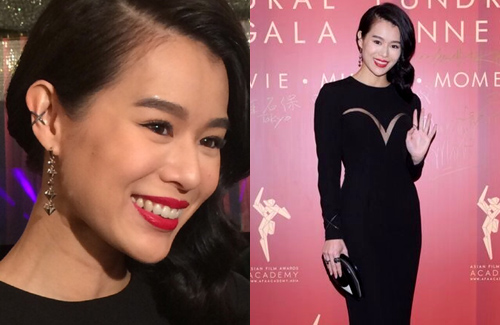 It has been reported that Myolie Wu (胡杏兒) is looking into signing a management contract with Johnnie To’s (杜琪峯) agency, Milkyway Hairun, which is based in Mainland China.

Since Myolie’s current management contract with TVB will be ending early next year, she has been approached by a number of agencies from Mainland China, including Johnnie To’s Hairun. An insider revealed that TVB has also been working hard to convince Myolie to renew her contract by offering her a lucrative three-year deal for $10 million HKD, more freedom in choosing projects, and additional opportunities to film in Mainland. However, the 35-year-old hinted earlier that she is uncertain in renewing her TVB contract, since she wants to think carefully about the next stage of her career.

New developments allege that Myolie is locked in to sign with Hairun due to her interest in expanding Mainland opportunities. One of the main producers of Johnnie To’s films, Hairun also has a strong hold in the television market in Mainland China and has produced many successful Chinese dramas.

Johnnie To and Myolie became acquainted after filming 2011’s Life Without Principle <奪命金>. An insider revealed that Johnnie was impressed with Myolie’s hard-working attitude and has been keeping in touch with her for future work opportunities. On November 3, Johnnie personally invited Myolie to attend a charity ball for the Asian Film Awards and the two greeted each other like close colleagues. Reports say that Johnnie had a hand in convincing Hairun to sign Myolie.

72 comments to Myolie Wu to Sign with Johnnie To?