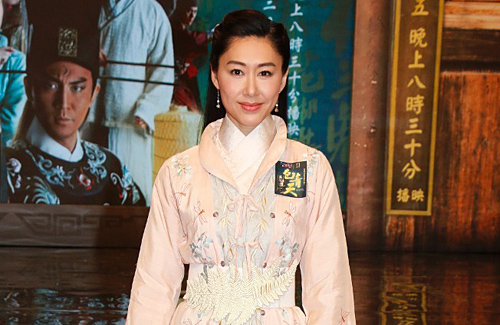 TV Queen Nancy Wu (胡定欣) attended a promotional event for Justice Bao: The First Year <包青天再起風雲>, which will be airing on July 22. Confirming that this is the last drama she has filmed with TVB, it raised questions whether Nancy has chosen not to renew her contract.

“Originally, I had a drama scheduled to be filmed in June or July, but I was notified that it got cancelled [due to script quality issues]. At this moment, I haven’t received any offers to film new dramas. Whether I’m filming or not, it does not concern my contract,” Nancy said. When asked when will her contract end, she replied that there is still a period of time left.

It appears Justice Bao: The First Year will be Nancy’s only drama to be broadcast this year. It has been a year since her drama Deep in the Realm of Conscience <宮心計2深宮計> was aired. She expressed, “I was worried that I won’t have any dramas out this year. My co-workers had discovered that my dramas in the past two to three years were aired during summer break. Despite that, the ratings were pretty good so I hope it will be the same for Justice Bao: The First Year.”

Rumored to Be Working with Ex-lover Kenneth Ma

There were rumors that TVB intended to pair Nancy and Kenneth Ma (馬國明) to collaborate on a new drama. Nancy denied there were such arrangements for now, although she does want to work together with Kenneth again, and praised his performance in Big White Duel <白色強人>.

Netizens also hoped that she would get back together with Kenneth as a couple in real life, but Nancy commented that everyone is just joking.