Natalie Tong Is Not Jealous of Sisley Choi 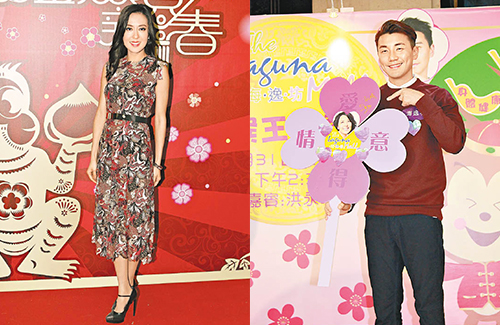 The New Year has been a gossipy start for the celebrity couple, Tony Hung (洪永城) and Natalie Tong (唐詩詠). The couple of one year is rumored to be on the brink of a breakup because Tony has allegedly gotten a lot closer with rising actress Sisley Choi (蔡思貝), his costar in the period comedy drama Peculiar Taste <味想天開>.

After collaborating in the TVB drama, which wrapped up production earlier this month, Tony and Sisley kept in close contact. The two are often spotted at mutual friend gatherings, and they even work out their schedules to take jogs together.

Does Natalie have confidence in her boyfriend? “It’s just jogging,” she repeated. “I’ll join them next time. That way it won’t turn into a big deal.”

Tony also had similar words to say about his rumors with Sisley. He laughed when the reporters asked if Natalie forced him to kneel on glass after jogging with Sisley. “No. Natalie knew about it. I told her to jog with us, but she was busy that day.” Would Tony get Natalie to join them next time? “Yes. She needs to be more active.”

Regardless of gossip, Tony and Natalie are still as strong as ever. Tony revealed that they are already at the stage of meeting parents. The couple will be meeting each other’s families for the upcoming Lunar New Year holiday.

8 comments to Natalie Tong Is Not Jealous of Sisley Choi