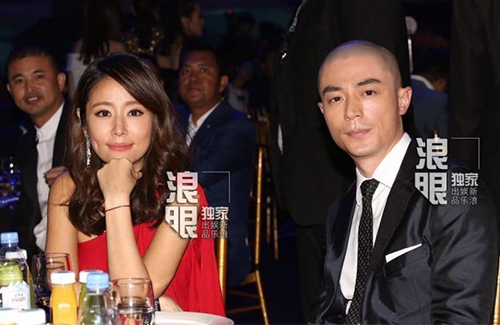 Newlyweds Ruby Lin (林心如) and Wallace Huo (霍建華) attended their first event together as husband and wife at the 2016 Bazaar Charity Night in Beijing on Friday. Though the couple did not walk the red carpet together, they were photographed sitting with each other at the event.

Ruby wore a loose and fiery one shoulder gown, with a fluttering dress that covered her growing pregnant belly. Wallace, who is filming Qing Dynasty drama Ruyi’s Royal Love in the Palace <后宫·如懿傳> with Zhou Xun (周迅), appeared with a shaved head.

As Ruby had officially confirmed her pregnancy to the media only a few days prior, Wallace was bombarded with questions about his pregnant wife at the red carpet. Asking if he’s excited about being a father, Wallace smiled shyly, rubbed his bald head, and said, “Don’t you guys have other questions to ask me?” Mentioning that he has a busy filming schedule, Wallace said, “We all have the same job so she understands. I’ll try to spend as much time with her as I can.”

Ruby, who is four months pregnant, said, “I am well! The baby in my tummy is also very healthy!” The 40-year-old said she has no preference in the baby’s gender. Though she’s taking an acting hiatus, she will continue to do more commercial and magazine photoshoots as she enjoys work.

Asking why she didn’t announce her pregnancy earlier, Ruby explained, “Nothing much. This is my personal matter after all. I wanted to keep as much privacy as I could.”