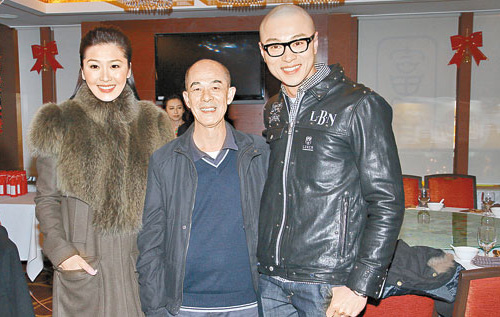 Niki Chow’s (周麗淇) first series upon her return to TVB, Bottled Passion <我的如意狼君>, was assigned a “cannon fodder” airing time slot. Despite this, Monday night’s finale peaked at 40 points in ratings. Once promising that she will do anything if the ratings reached 40 points, Niki said that she will not back out on her promise with the exception of having to wear a bikini!

The ratings for Bottled Passion’s finale averaged 36 points, peaking at 40 points, which beat When Heaven Burn’s <天與地> 34 points in its finale. Niki admitted that this time, she made Producer Lee Tim Sing (李添勝) proud. Niki noted that Tim Gor was her talent scout. Asked whether she will film a sequel, Niki said, “If he were to ask, I will immediately get into place!”

Niki and Raymond Wong (黃浩然) were discussing whether they should organize a celebration party for Bottled Passion. The most important thing was that everyone was happy. Tim Gor expressed that he was extremely satisfied, performing beyond the “cannon fodder” results.

TVB Deputy Director of External Affairs, Tsang Sing Ming (曾醒明), indicated that there were 15 complaints filed regarding the overly tragic ending of Bottled Passion. The scene that received the highest rating occurred when Niki reflected upon her romantic moments with Raymond Wong. The Hong Kong Broadcasting Authority received 4 complaints, expressing dissatisfaction over Raymond Wong’s death. In addition, 7 complaints were filed over foul language and rough behavior.

“When Heaven Burns” Praised as a Miraculous Drama

Regarding When Heaven Burns peaking at 34 points in ratings, Mr. Tsang praised the drama, “It is a miraculous drama! A drama with soul!” The ending episodes of When Heaven Burns were uploaded by netizens online. TVB was accused of decreasing the official ratings in Hong Kong [through the online distribution]. Mr. Tsang said, “It is impossible for TVB to harm themselves. From our  preliminary understanding,  an American agent leaked the clip, which is currently investigated by our Internal Affairs department.”

In addition, When Heaven Burns star, Moses Chan (陳豪), appeared at the airport yesterday, but declined to say where he had traveled to. Jayne: Tim Gor’s last production will be “Detective Columbus” starring Wayne Lai. Another Producer can be given the task of producing “Bottled Passion 2.” It’s not the first time that another producer was asked to take on another franchise, such as Jonathan Chik producing “Healing Hands 3” after Gary Tang produced the first two installments.