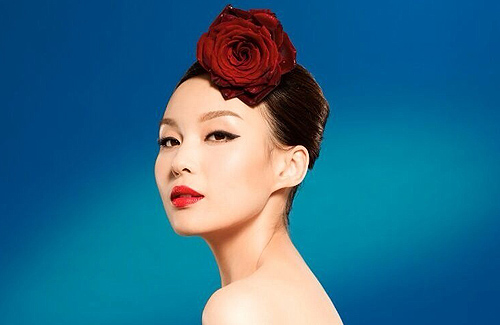 After winning Miss Chinese International in 2008, Oceane Zhu (朱璇) immediately signed with TVB in hopes of continuing her career in Hong Kong. She was chosen to take on the lead role in Prince of Tears <淚王子>, a Taiwanese period film directed by YonFan (楊凡). Although the film was well received overall, it did not suit the tastes of Hong Kong citizens and unfortunately, Oceane was unable to breakthrough the competitive local market.

Since Cantonese is not Oceane’s native language, it is a challenging to film in Hong Kong. The actress has received praises from many people, but despite this, Oceane admitted, “I always thought that my acting was not up to par and that’s the reason why I haven’t been cast in any other films. There was a point in time where I was very saddened by this, I was always questioning my abilities.”

After Prince of Tears, Oceane remained jobless for over a year. It was only when TVB brought in the Mandarin pinyin team, did Oceane finally get a second chance. During that time period, Oceane thought about giving up her a career many times but ultimately decided against it.

With the help of the pinyin team and TVB executive, Catherine Tsang (曾勵珍), Oceane received a role as a regular in the sitcom Be Home for Dinner <誰家灶頭無煙火>. Even though Oceane lacked dialogue in the sitcom, it was revealed that Catherine and Virginia Lok (樂易玲) have been tremendous helps in terms of getting Oceane back on her feet. While Catherine personally helped Oceane with her pronunciation, Virginia was the main mediator in helping her gain the lead role in Prince of Tears in the first place.

When Oceane learned that her weak Cantonese ability was the main barrier, she spent the majority of time perfecting her pronunciation. “I’m afraid that I won’t be able to say my lines properly and be the bottleneck when it comes to finishing work. That’s why I spend ten times longer than everyone rehearsing my lines when I get the script, and I even found a teacher to teach me pronunciation.”

During her time in France, Oceane pushed herself to learn French. Initially, she received fairly high exam marks during her studies, and because of this, Oceane attempted to test out her abilities in real life. After failing to understand French the first time around, she spent three months studying intensely and meeting up with friends to converse in French. “French is not hard to learn, so a lot of my classmates and teachers don’t have high standards! It is relatively simple, all I had to do was memorize everything and study until I’ve absorbed the material.”

After suffering low self-esteem from failing to understand a foreign language initially, Oceane was known to be a stay-at-home type of girl. Due to this, Oceane developed low self-confidence and a great sense of independence. “When I’m not happy, I’ll handle it myself; I won’t tell anyone about it – not even my parents. However, my mom has previously complained to me before and asked why I don’t tell her anything! But in reality, it’s not that I don’t want to say anything, it’s that I can’t! I don’t want them to worry, it’s like how you can’t use water from somewhere far to save a fire that’s close.”

As well, Oceane finally got a taste of the cultural difference between the French and the Chinese. France embraces a considerably more open culture in terms of lifestyle, and education. Because of these differences, Oceane did not even date once in France.

No Pressure from Family

Oceane comes from a well-off family, but she still insisted on getting a part-time job in France to support her personal expenses. She worked as a hostess at a restaurant and performed part-time modelling. It was through pure coincidence when a bunch of her friends and her entered a beauty pageant and then subsequently started working for TVB.

Thoughts on Christine Kuo and Dating Within the Circle

While Christine Kuo (苟芸慧) is also a beauty queen, her presence at TVB is better known despite her heavily-accented Cantonese. Since both are beauty pageant winners, it is inevitable that there would be some comparison. On one hand, while Christine has not starred in any films, her recent rumors with Aaron Kwok (郭富城) have propelled her into a new level where it is speculated that she receives three times the normal amount for attending events.

Unlike Christine, who gained the name of homeboy goddess from the start, Oceane’s entry into the industry has been calm and quiet. She has few rumors and does not appear on magazine covers often. Oceane explains that the reason behind this is because, “There are a lot of dating in the industry, but I don’t want to be in a relationship with anyone in the same company. It might be awkward when filming in the future. Often times, even when you date someone just once, you’ll always be on that relationship map.”

While Oceane may still receive minor supporting roles, she maintains a positive attitude. With her accepting one small role at a time, perhaps she will eventually make the breakthrough she deserves in the industry.