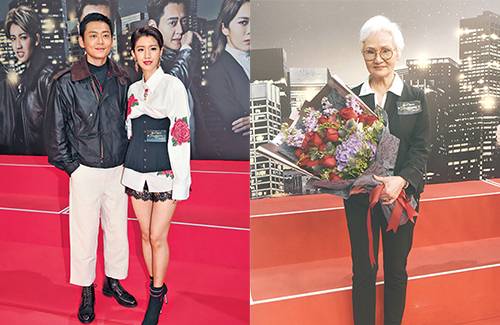 Owen Cheung (張振朗) and Sisley Choi (蔡思貝) attended a promotional event for their upcoming TVB anniversary drama Legal Mavericks 2020 <踩過界II>, which premieres in Hong Kong on November 16, 2020. A direct sequel to the 2017 legal drama of the same name, Owen and Sisley reprise their roles as GoGo and Deanie respectfully, while starring alongside Vincent Wong (王浩信) as the lawyer Hope Man.

Reporters joked that Owen has it lucky this season, as GoGo gets intimate with many female characters throughout the show. The 33-year-old then shared that he extremely dislikes doing intimate scenes, and would rather spend most of his time doing action sequences.

“I do share a kiss with Kelly Cheung (張曦雯),” Owen recalled. “Lesley Chiang (姜麗文) also gives me CPR to save me. I think the only one I didn’t get to kiss was Jessica Kan (簡淑兒).”

Sisley joked, “Owen also doesn’t have kissing scenes with Sisley, but only with Deanie [her character]. Kissing someone with buck teeth feels completely different!”

The actress added that Owen would get extremely shy before doing intimate scenes with his female costars, sharing, “We did have a few scenes of us being intimate, and [Owen] would turn extremely red! He would always ask me for permission first, and discuss about how to do the scene. He’s a gentleman. I am very comfortable with him.”

Owen said, “Sisley and I have already established our chemistry, so we’re a lot more relaxed. But I would still choose to do a hundred action sequences over one kissing scene.”

75-year-old veteran actress Suet Nay (雪妮) also attended the event—now retired from acting, Legal Mavericks 2020 will one of the very last series of her career. After being presented with a thank you card and bouquet on stage, Suet Nay broke down and cried. “I was in such a mess [on stage],” she said afterwards. “My hearing isn’t so good anymore. I’m wearing hearing aids in both of my ears.”

Despite her love for acting, Suet Nay had decided to retire for the sake of her health. She wants to spend more time doing leisurely activities, such as swimming, having tea, and cooking. Suet Nay still has three more series left to air—Stride <大步走>, Zombie <食腦喪B>, and Chinatown <唐人街>.

1 comment to Owen Cheung Gets Shy During Intimate Scenes