Since enlisting into South Korea’s Navy in August 2020, actor Park Bo Gum has been greatly missed by fans. Patiently waiting for his release, they counted there are six months left until his discharge in April 2022. While the actor remains low-key during most of his military service, fans are glad even for a brief glimpse at the star looking happy and healthy while completing his activities. in the military.

Last October, Bo Gum made hearts flutter when photos of him in a navy uniform circulated online. His later appearance showed him hosting a military concert that got broadcasted on YouTube. As a previous Music Bank host for more than a year, Bo Gum displayed great ease while hosting, and once again drew significant attention for his military look.

A year later, Bo Gum continued to fulfill his cultural promotion duties and recently made a public appearance by co-hosting the South Korean Navy’s National Defense Concert. Donning a black sailor uniform, Bo Gum presented both discipline and professionalism as he greeted the crowd with a salute. Aside from looking more tanned and sporting cropped hair, Bo Gum has not changed much. 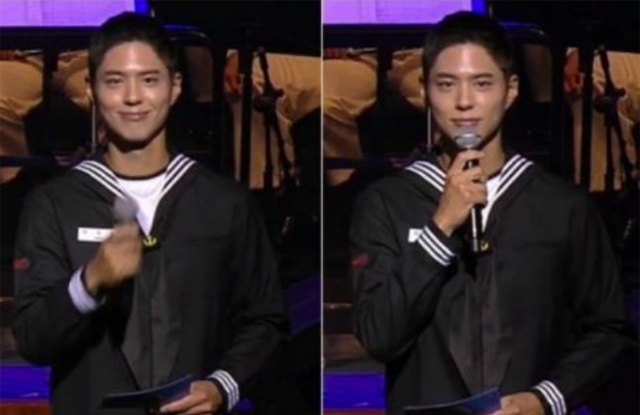 Despite standing next to an expert host, Bo Gum did not lose the spotlight or any aura as he charmed the crowd with his radiating smile and polite posture. Impressing everyone with his self-management during the military, many are more than ready to welcome him back to society!