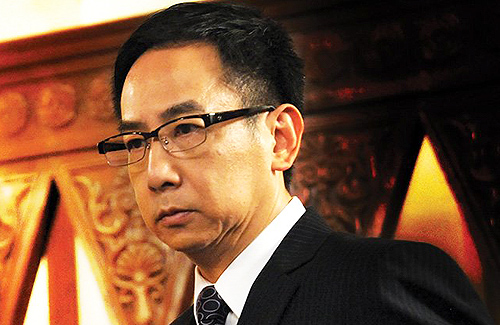 A critically-acclaimed veteran actor who has been with TVB since 1993, Ram is well-known in the business for his method acting ability and likable appearance. He has portrayed many iconic TVB supporting characters, notably File of Justice’s <壹號皇庭II> Eric Chau and War of the Genders’ <男親女愛> effeminate lawyer James Tsim, and his younger TVB colleagues affectionately call him “Teacher Chiang.” But do many older fans remember that Ram Chiang used to be an award-winning platinum singer-songwriter?

His 1990 self-composed duet single with Rita Carpio (韋綺珊), “No Need to Know One Another” <相逢何必曾相識>, was a top ten winner at the 13th Top Ten Chinese Gold Songs Award. His 1995 duet with Lo Ta Yu (羅大佑), “Queen’s Road East” <皇后大道東> also quickly caught as a classical Cantonese pop song. With catchy lyrics that provided humorous commentary about the 1997 British handover of Hong Kong to mainland China, “Queen’s Road East” became an immediate number-one hit upon its release in 1995.

Having once walked the red carpet for his singing career, will Ram consider returning to the music industry in full force? Ram shook his head. He is done.

Ram worked as a street performer in Temple Street before he was discovered by PolyGram in the mid-1980s. Ram was an “invisible” member of Raidas, a popular electro pop band that was active in the late 1980s. Ram briefly worked as the team’s programmer although he was never formally recognized as part of the team.

The 51-year-old all-rounder entertainer said that being a director was his childhood dream. As his family was unable to support him to a film school, Ram went to late-night adult school to study English and quick film courses.

Ram saw the music industry as a platform that could bring him closer to acting. Soon after becoming a singer, Ram signed with TVB. “If I didn’t sing, I wouldn’t be able to become an actor. As an actor, I would be one step closer to being a director.”

Alas, Ram never went ahead to fulfill his director dreams. Twenty years have passed, and although Ram has established himself as a recognized television actor, his achievements did not bring him closer to directing opportunities.

But the past twenty years did not go to waste. His family was there. His friends were there. Ram remembered the times when he had to balance both his television career and obligations to take care of his only toddler son. Now, Ram’s son is going to college.

“If he decides to study a specialized subject, I’ll have to work hard for a few more years,” Ram laughed.

Ram is a devout Christian and is one of the few TVB artists who refuse to attend TVB drama blessing ceremonies, a traditional Taoist practice to bless the involved persons with good luck and Godspeed.

“If you call yourself a Christian, then as an apprentice you must help your master do his work. It’s like having your student helping you with your camera equipment. For many years, I insisted on not attending blessing ceremonies, and yet I never had any accidents.”

Now placing his efforts in his acting career, Ram still found time to occasionally perform his own jazz music. His wife praised that his singing has gotten much better. “I remember Dayo Wong (黃子華) once told me that Leslie Cheung (張國榮) had mentioned to him that his singing had improved once he sealed his microphone.”

Ram revealed that Wong Cho Lam (王祖藍) wanted to cast him as a “has-been” singer in his upcoming sequel for Inbound Troubles <老表，你 好嘢！>. “I’m still thinking about it.”

Ram explained that he found the Hong Kong music industry “dark,” which was a contributing factor to Ram’s decision in retiring his singing career. But does that mean Ram finds the television industry “bright”?

“A record label is a little factory. Don’t even think about making it big if you don’t know how to polish shoes. I enjoy my life now. My wife likes to watch my dramas. A television station is a big factory with many rules, and as long as I do my duty, polishing shoes isn’t completely necessary, although it does have its benefits. I can still keep up with what I’m doing. I have freedom because I am low-profile. That’s why I tend not to attend promotional events for my dramas. I enjoy this freedom I have.”

Source: Next Magazine #1216 via ihktv.com