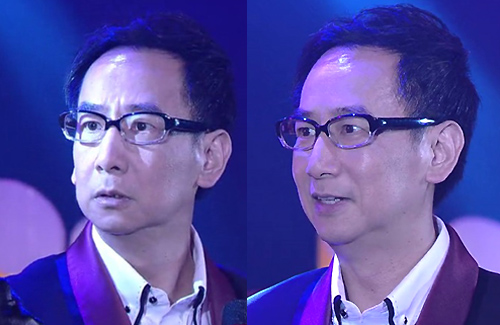 During episode 12 this week, Ram reunited with his partner Rita Carpio (韋綺姍) and performed a mock version of their very popular hit “You Needn’t Be Acquaintances to Meet with Each Other” <相逢何必曾相識>. Changing the entirety of the lyrics to fit a funeral scene, Ram belted out to the new version of his song, “You Needn’t Be Acquaintances to Burn Funeral Clothes” <相逢何必曾燒衣>.

Retaining its catchy tune and spicing it up with new jazzed up lyrics, the clip of Ram singing was soon uploaded onto various social networking sites and platforms. In a little less than 24 hours, one of Ram’s video clips garnered over 300,000 likes with fans urging him to make a comeback in the music industry. Fan messages flooded Ram’s Facebook page and netizens even dug up an old clip of Ram covering Danny Chan’s (陳百強) “Farewell Tonight” <今宵多珍重>.

Not only has Ram become an overnight Internet sensation, but his performance managed to boost viewership ratings. Come On, Cousin had an average of 25 points throughout its two-week broadcast. During Ram’s episode, the ratings started at 26 points when Ram sang the original version of his song with Rita. Rising to an all-time high, the episode peaked at 28 points when Ram chatted with the spirit of his onscreen deceased wife, Rita, in the park.

Having worked under the same record company in the past, Chilam Cheung (張智霖) openly encouraged Ram to step his foot back into the music scene again.

Chilam expressed, “When we debuted, we were with the same record company. ‘You Needn’t Be Acquaintances to Meet with Each Other’ was competing with ‘Modern Day Love Story’ <現代愛情故事>. A month or two ago, Rita spoke about a reunion with Sarah Wong (黃寶欣) and Ram. They went for hot pot but didn’t sing. Maple Hui (許秋怡) was also supposed to attend, but her ceiling broke so she couldn’t come. But they plan to do it again. We welcome the idea [of singing together again], we did sing ‘Old Friends’ <舊朋友> and I want to sing it again.”

On the idea of Ram making a comeback, Chilam added, “He has to! Just wait for me to set this up [with the company].”