With this year’s TVB Anniversary Awards to be held on January 10, 2021, the fight for Best Actor is largely between Raymond Lam (林峯) and Vincent Wong (王浩信).

A prolific actor, Raymond filmed many classic dramas during his tenure including A Step Into the Past <尋秦記>, Lofty Waters Verdant Bow <雲海玉弓緣>, Survivor’s Law <律政新人王>, Blade Heart <血薦軒轅>, Twin of Brothers <大唐雙龍傳>, and Moonlight Resonance <溏心風暴之家好月圓>. Raymond’s biggest chance at clinching Best Actor was in 2014’s Line Walker <使徒行者>, but he had already left TVB by the time the awards ceremony took place so the award went to Roger Kwok (郭晋安) for Black Heart White Soul <忠奸人>. However, Line Walker is one of TVB’s biggest IP’s in recent years, spawning a franchise of three dramas and a movie. In 2019, fans were excited to learn that Raymond had signed with TVB’s sister company, The Voice, Entertainment and would start filming for Line Walker 3.

Nominated for Best Actor 16 times, Raymond has never won the top TVB award before. Many netizens feel that it is his time, and that TVB owes him the award with his comeback in Line Walker 3.

When Raymond left TVB six years ago, a changing of the guards took place among leading actors at TVB, most notably with the rise of Vincent Wong. Winning Best Actor in 2017’s Legal Mavericks <踩過界> for his role as a blind lawyer, Vincent’s compelling charisma and persuasive acting made him an audience favorite.

Nominated for Best Actor for his performance in Al Cappuccino <反黑路人甲>, Vincent turned in a refreshing performance as a struggling-actor-turned-undercover-triad-boss. Even though he has complex relationship lines with various female characters, each story was handled very well and the ending was surprising. Though he is currently signed with TVB’s sister company, Shaw Brothers, Vincent continues to be in the limelight with the recent broadcast of Legal Mavericks 2. 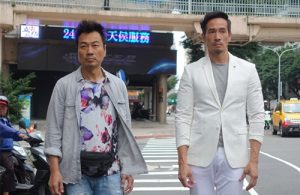 Already winning Best Actor last year, Kenneth Ma‘s (馬國明) nomination for Line Walker 3 is largely considered to be just in the running this year without a real threat against his competitors. Other Best Actor contenders are Moses Chan (陳豪) and Wayne Lai (黎耀祥) for their roles as assassins in Death by Zero <殺手>, but they have also won the award in previous years.