Raymond Lam’s Ex, Karena Ng, Wants to Get Back Together? 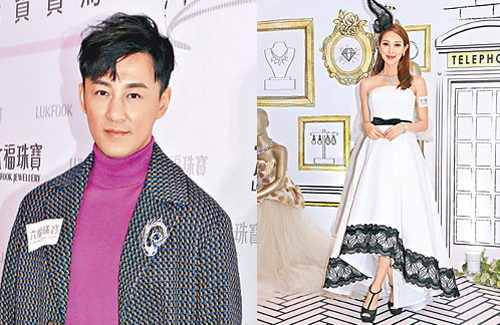 Recently returning from a vacation in Japan with girlfriend, Carina Zhang (張馨月), Raymond was asked about rumors that his ex-flame, Karena Ng (吳千語), wants to get back together. When asked if he will take Carina to join his family’s Christmas gathering, he immediately replied, “Let’s not talk about relationships!” He continued to refuse answering when asked if Karena had tried to get back with him, and said he hoped that the media will focus on his projects instead.

Raymond’s lack of response reluctantly drew reporters to interview him about his plans for Christmas and if he regularly gives jewelry gifts to his family or partner. He said, “I’m very thankful to Luk Fook. Whenever it’s my friends or elders’ birthdays, I would get discount and buy them jewelry. I also buy them for my parents.” Raymond said that one day he will be stepping into another stage, and hopes that the brand will still sponsor him. He smilingly said he doesn’t want to inherit his parents jewelry, as he wants to rely on himself to purchase them.

Although several months pregnant, Grace appeared in five-inch high heels to model for the event and expressed she will be careful. Earlier, Kevin Cheng (鄭嘉穎) had said Grace would not give him a Christmas present. Grace smiled when mentioning her husband, “Before he attended the event, we went out to eat and talked about how we don’t need to exchange Christmas gifts this year, because we don’t want the pressure. He said okay, and now he’s saying it differently with you.”

The 27-year-old actress also said that the most valuable jewelry that Kevin gave her was her wedding ring. But she can’t bear to wear it, because she is scared to lose it while washing her hands. But Grace wants to buy jewelry for her new baby. “I’ll directly hand it over if it’s a girl, but if it’s a boy, then he can give it to his future wife.” Yet to reveal her baby’s gender, Grace said she might do so before Christmas.

3 comments to Raymond Lam’s Ex, Karena Ng, Wants to Get Back Together?