Raymond Lam Bashed as a Playboy by Liu Yuqi 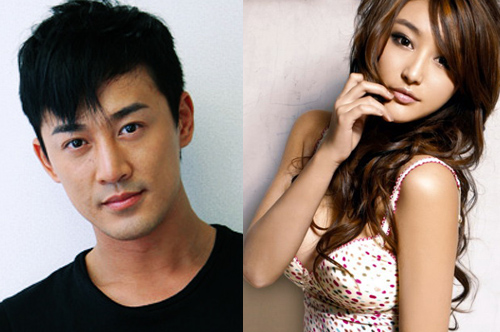 Recent photos of Raymond Lam (林峯) and 18-year-old film actress, Karena Ng (吳千語), on a dinner date together incurred the wrath of his 3 rumored ex-lovers. Mavis Pan (潘霜霜), Rose Chan (陳嘉桓), and mainland actress, Liu Yuqi (劉羽琦) implied that Raymond was a playboy in love. Liu Yuqi was especially vocal, stating that Raymond had even invited her to sleep at his house each time she was in Hong Kong!

It was understood that Yuqi met Raymond in September 2011 at a mutual friend’s birthday party in Beijing. The pair allegedly dated and advanced to the stage of meeting each other’s parents.

Earlier, Liu Yuqi was photographed entering Raymond’s residence in the middle of the night by Apple Daily earlier. Raymond’s cousin, Lin Xiawei (林夏薇), had opened the door for Yuqi. This alerted the Hong Kong paparazzi of Yuqi’s association with Raymond.

After the exposure of Raymond’s allegedly interest in 18-year-old film actress, Karena Ng, Liu Yuqi grew extremely jealous. Yuqi blasted Raymond, “A playboy! I cannot withstand it anymore. At first, he treated me very well, leading me to believe that he is a trustworthy man. Actually, many people urged me afterward that he is a player! I have been hurt.”

Through his manager, Raymond response to Yuqi’s dating claims was, “I truly do not know her that well! It does not matter what she says, I will not respond!”

Yuqi Never Broke Up with Raymond

When Yuqi discovered that Raymond failed to acknowledge their romantic relationship, she laughed bitterly. “I do not wish to mention this person again! He is not a good man!” Yuqi remarked that around Christmas 2011, she was still involved with Raymond. “At that time, he treated me very well. He always took the initiative to seek me out!”

Yuqi spent most of her time in mainland China. However, each time she was in Hong Kong, Raymond allegedly invited her to his house. “Since it is necessary to maintain a low profile, I have to meet him at home!”

When asked whether she had slept with Raymond, Yuqi said, “Why don’t you ask him? Ask him what we did at his house!” Since Raymond preferred to be low-key, they did not take any photos together. However, Yuqi indicated that Raymond’s bedroom was decorated with many male toys. Asked whether the photo which she had posted on Weibo earlier in a bedroom setting was in fact taken at Raymond’s house, Yuqi declined to answer.

According to Yuqi, Raymond never officially broke off their relationship. However, the phone calls and communications eventually died down, alerting her of his disinterest. When Yuqi arrived in Hong Kong this summer to film Lan Kwai Fong 2, she did not hear from Raymond at all. She expressed that she was not disappointed in Raymond, “I only felt that he is a ‘Best Actor,’ I do not wish these things to impact his work!” Mavis Pan: “He is Not Worth Mentioning!”

With Raymond romantically rumored with Karena Ng and Liu Yuqi, the press reached out to Raymond’s ex-girlfriend, Mavis Pan, for comment. Indicating that she no longer had any feelings for Raymond, Mavis said she did not care who he now dated. “Our past is already over. This type of person is not worth mentioning!”

Asked whether she considered Raymond to be a love cheat, Mavis said, “We will wait and see! Time will prove everything!”

Rose Chan: “Do Not Know if He is a Playboy”

Star of The Legend is Born: Ip Man <叶问前传>, Rose Chan, was once a rumored party in Raymond Lam and Mavis Pan’s relationship. Asked to comment on Raymond, Rose replied, “Why are you asking me? Our rumors were over a long time ago!”

When asked to comment on whether she considered Raymond to be a playboy, Rose said, “I have no knowledge.” Indicating that she is no longer in contact with Raymond, Rose said, “Whether he is a playboy or not, you go ask him! I only know that I am not a player.”

Rumored to be Raymond’s new love interest, Karena Ng declined to comment on his rumors with Liu Yuqi. Karena said, “I am not in the position to comment.” Asked whether she considered Raymodn to be a player, Karena said, “As friends, I would not know of his personality.”

TVB executive, Virginia Lok (樂易玲), was asked to comment of the recent scandals of Raymond Lam, Bosco Wong (黃宗澤), and Ron Ng  (吳卓羲). Ms. Lok referred to the three men as her “three sons,” stating calmly, “This proves that our ‘three sons’ are very popular. This is the cost of popularity; it comes in a package. They expect to be used for publicity.”

Jayne: Liu Yuqi’s story resembles Mavis Pan’s breakup story quite closely. Yuqi said that Raymond did not like to take photos, preferred to meet at his house, and never officially ended their relationship. Yuqi could have read the tabloid reports from last year regarding Raymond’s breakup with Mavis and reiterated the comments.

If she has already said this much, then why did Yuqi not admit to sleeping with Raymond Lam if she really did so? Why beat around the bush? Certainly, her image as a sexy model/actress would not be injured in any way if she admitted she had slept around.

I take Liu Yuqi’s story with a grain of salt. She has not said anything to truly indicate that she knew Raymond on an intimate level. Which is why Raymond does not feel the need to respond to her allegations in a detailed manner.

My impression is that Liu Yuqi is an attention seeker, especially how she responded to her romantic allegations with Sammy Shum, indicating she wished to know him better, although he was involved with JJ Jia.

If Liu Yuqi cannot produce more “evidence,” then stop using Raymond for publicity! Let him pursue Karena Ng, who I sense he is interested in.