Raymond Lam Drowns Himself with Work After Karena Ng Split 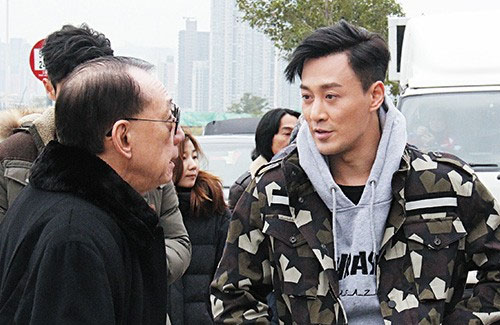 In February 2013, Raymond Lam (林峯) confirmed his long-speculated relationship with his “BB”, Karena Ng (吳千語). Their relationship lasted for four solid years until December, when rumors of a split started spreading. Due to individual work commitments, Raymond and Karena found it hard to find time together. In her last interview, the 24-year-old actress told the press that she hasn’t seen Raymond in over two months. There is speculation that Karena has already found a new boyfriend—Brian Shi (施伯雄), grandson of real estate entrepreneur Shi Ziqing (施子清). Back to the bachelor life, Raymond has been drowning himself with work. After ending his EEG contract and establishing his own personal studio, Raymond returned to Hong Kong to film EEG’s new web drama Police Tactical Unit <PTU機動部隊>. The actor has been spotted filming the show recently—despite the breakup rumors, the 38-year-old was in a good mood. When EEG’s chairman Albert Yeung (楊受成) stopped by to visit the set, Raymond took the time to greet him and talk to him.

Karena, on the other hand, is in Mainland China filming Chinese period drama Love on the Battlefield <戰地迷情>.

With an even busier schedule ahead, is Raymond using work to get over his breakup?