Raymond Lam to Spend at Least 10 Million HKD on 5 Weddings? 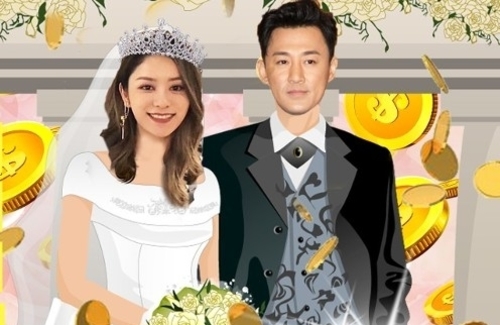 Recently, actor-singer Raymond Lam (林峯) and his girlfriend of slightly over a year Carina Zhang (張馨月) registered for marriage in Hong Kong on the down-low. Not long ago, the Mainland model reportedly flew to Hong Kong  to visit her lover on set, as well as plan for their wedding. It seems like the bride-to-be needs all the help she can get, as the couple allegedly intends to hold five whopping wedding celebrations over the course of several months.

It is said that the two will have a grand, romantic European wedding, and then return to Hong Kong to host a wedding banquet for their friends and family. However, Raymond is not only a celebrity but also the son of “Xiamen’s Li Ka Shing (李嘉誠),” Lam Kwok-Wah (林國華), who has a huge family and is very nervous about the marriage. To avoid losing face, Kwok-wah wants the pair to throw a wedding banquet in Xiamen and Quanzhou.

On top of that, Raymond and Carina also need to hold a wedding banquet in her hometown Jiangsu as well. The total cost for the five weddings is conservatively estimated to be about 10 million HKD.

Yet, that amount is incomparable to the price of the 3,000-sq-ft apartment Carina looked at in the Mid-Levels. It is worth more than 100 million HKD, and there is a high chance the couple would reside there after marriage.

1 comment to Raymond Lam to Spend at Least 10 Million HKD on 5 Weddings?