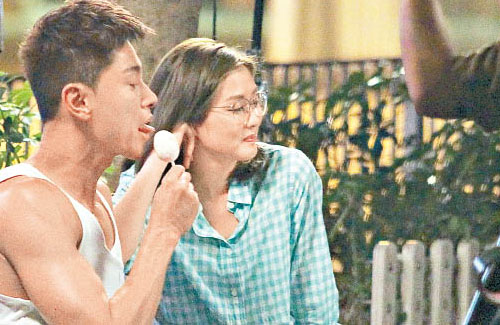 Raymond Wong (黃浩然) and Eliza Sam (岑麗香) rather share kisses than suffer in the heat. A couple of nights ago, the TVB actors did some outdoor photography in Yau Ma Tei for their new drama Apple-colada <果欄中的江湖大嫂>, sister production to 2016’s My Dangerous Mafia Retirement Plan <火線下的江湖大佬>. Raymond and Eliza were sitting at a bench, licking popsicles together. Eliza teased Raymond when he dropped his popsicle, but then offered him a taste of her own.

Apple-colada centers on Lee Mung-lo, portrayed by Alice Chan (陳煒), a retired actress who discovers that her late brother had left behind some stocks at the fruit market. To pay back her debt, she starts a business of her own. Raymond plays the son of Tommy Wong (黃光亮), the boss of the fruit market.

2 comments to Raymond Wong and Eliza Sam Share a Popsicle