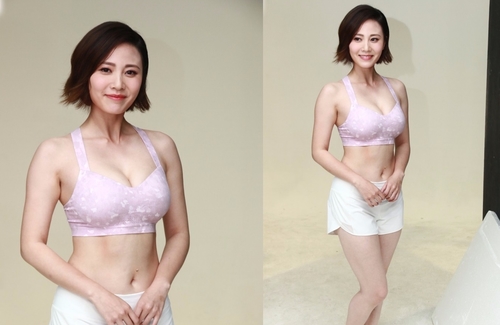 Earlier, Rebecca Zhu (朱晨麗) did a photoshoot as the spokesperson of a new slimming product – a first for her. Clad in a pink sports bra that revealed her three-inch cleavage and white shorts, Rebecca said it’s been awhile since she dressed so sexily for work. The 31-year-old actress claims she did not deliberately lose weight beforehand, and achieved her figure by eating the slimming products she’s endorsing.

Rebecca shared, “I have a big appetite and I love to hoptot and eat midnight snacks. On top of that, I barely have time to sleep and exercise when I’m filming dramas, so I’m very happy to be selected by the client to be the product’s spokesperson. I am very satisfied [with the pay].”

Madly praising the product, the actress said she’d recommend it to rumored boyfriend Matthew Ho (何廣沛) if he needs it. “He is already really fit… in the pictures I see of him,” Rebecca said. “But, of course, if he needs it, I would recommend it to him since guys can also take it. He would be able to eat more because he only eats chicken when he’s training his body to be lean and muscular.”

She joked that if she hits him in their upcoming TVB drama The Great Soy Factory <大醬園> and he retaliates, she’ll probably faint since he’s so big now. “In the drama, we have a lot of bickering scenes, I’m afraid we will get too invested and I’ll be annoyed at him in real life too. I have to surpress myself.”

Shooting for The Great Soy Factory will begin on March 26th.