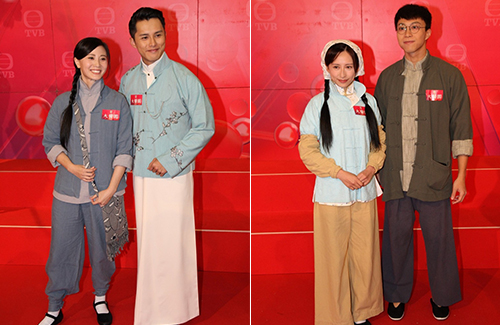 Rumored couple Matthew Ho (何廣沛) and Rebecca Zhu (朱晨麗) will be reuniting for a new TVB drama set in Republican-era China about the business politics behind a well-known soy sauce factory.

Rumored to be dating since collaborating in 2017’s A General, a Scholar, and a Eunuch <超時空男臣>, reporters teased the onscreen pair about using the TVB drama as an excuse to date. Jokingly, Matthew agreed. “Yes! We’ll be continuing our destiny. We’ll be spending more time with each other to get to know each other better. I’m afraid I might get sick of seeing her so much in the end.”

Playing a bickering pair on the show, Matthew and Rebecca’s characters represent the collision of two different worlds. Both characters are brought up in very different circumstances, but when their fates cross paths, they’ve come to learn how to respect and understand each other.

Meanwhile, Katy Kung will be playing a pair with James Ng, who she “would never” have another rumor with. The actress explained, “Rumors between us started because of him, that’s why I have to set my boundaries first!” Asking if it would be possible for them to date in the future, she said, “Absolutely not!”

Earlier this week, former TVB actress Jess Sum (沈卓盈) announced on Instagram that she has married her boyfriend of three years. Many of her friends in the industry, including Katy, did not know about the wedding.

Katy said she understood why Jess had to do it. “I’m not mad at her. We talk about it all the time. If any one of us suddenly disappear for a vacation, the public will know about it. We have told each other before that it’s okay if you don’t tell us.”