Ron Ng Yanked Off Stage by Fan; “My Hand is About to Break!” 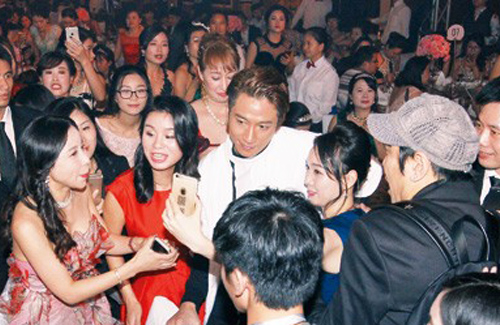 While it has been a while since fans have seen Ron in a television series, his popularity did not waver. Still popular among the middle-aged female crowd, Ron was almost forcefully pulled off stage while he was performing in Shenzhen.

Attending an annual concert for one of his endorsed brands as a guest performer, Ron sang his two songs, “Red Butterfly” <紅蝴蝶>  – the theme from Rosy Business <巾幗梟雄>, and “King Kong” <金剛>. In between the dancing, Ron entertained the crowd and attempted to shake hands with some of the fans sitting near the front. Besides the never-ending screaming and chanting, one overly enthusiastic fan pulled so hard on Ron’s arm that he was unable to free himself, causing him to cry out, “My hand is about to break off!”

Although tired after the show, Ron patiently spent the rest of his night taking photos with his fans.

3 comments to Ron Ng Yanked Off Stage by Fan; “My Hand is About to Break!”